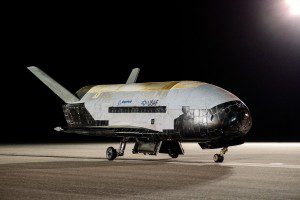 OTV-6 was the first mission to introduce a service module-a ring attached to the rear of the vehicle expanding the number of experiments that can be hosted during a mission. “This mission highlights the Space Force’s focus on collaboration in space exploration and expanding low-cost access to space for our partners, within and outside of the Department of the Air Force,” said Gen. Chance Saltzman, Chief of Space Operations.

The service module successfully separated from the OTV before landing, which is a necessary activity due to the aerodynamic forces experienced by the X-37B vehicle upon re-entry. In the coming weeks, the service module will be disposed of in accordance with best practices. Secretary of the Air Force Frank Kendall said, “The deliberate manner in which we conduct onorbit operations-to include the service module disposal-speaks to the United States’ commitment to safe and responsible space practices, particularly as the issue of growing orbital debris threatens to impact global space operations.”

Another NASA experiment aims to investigate the effect of long-duration space exposure on seeds. Scientists are interested in the seeds’ resistance and susceptibility to space environment-unique stresses, notably radiation. The seeds experiment will inform space crop production for future interplanetary missions and the establishment of permanently inhabited bases in space. 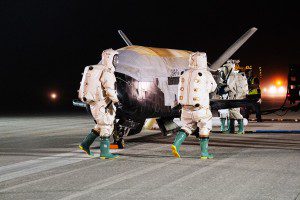 “The X-37B continues to push the boundaries of experimentation, enabled by an elite government and industry team behind the scenes,” said Lt. Col. Joseph Fritschen, DAF Rapid Capabilities Office’s X-37B Program Director. “The ability to conduct on-orbit experiments and bring them home safely for in-depth analysis on the ground has proven valuable for the Department of the Air Force and scientific community. The addition of the service module on OTV-6 allowed us to host more experiments than ever before.”

The X-37B was built by Boeing.

“Since the X-37B’s first launch in 2010, it has shattered records and provided our nation with an unrivaled capability to rapidly test and integrate new space technologies,” said Jim Chilton, senior vice president, Boeing Space and Launch. “With the service module added, this was the most we’ve ever carried to orbit on the X-37B and we’re proud to have been able to prove out this new and flexible capability for the government and its industry partners.”

In 2020, the X-37B received the Robert J. Collier Trophy for advancing the performance, efficiency and safety of air and space vehicles.