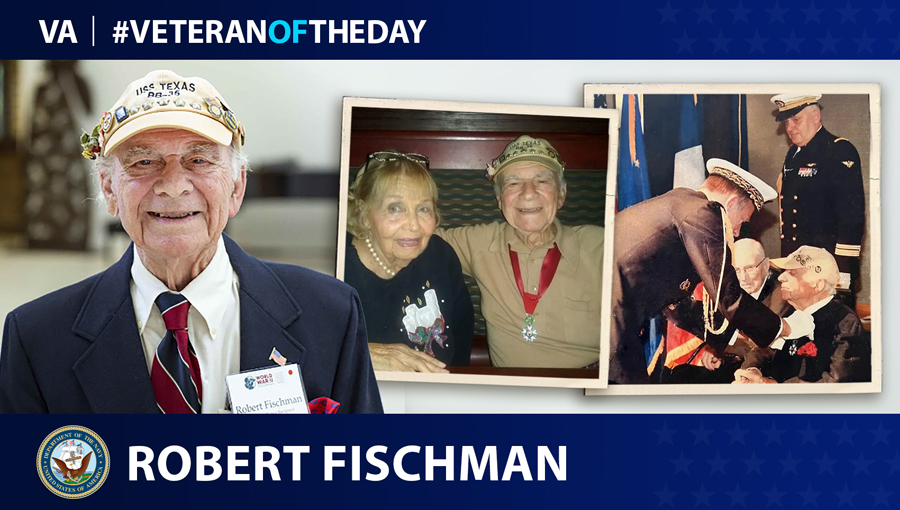 Robert Fischman was born in April 1925 in Del Ray, Va., and spent most of his life in Alexandria, Va.

During World War II, Fischman enlisted in the Navy at the age of 17. He attempted to enlist at 16 but had to wait until he was 17 to have his father’s signature. Fischman’s father had also enlisted at age 17, during the First World War.

On June 6, 1944, while assigned to the battleship USS Texas, Fischman manned the captain’s gig as a coxswain, overseeing a small boat that Navy battleships had onboard at the time carrying the captain, admiral and notaries. The USS Texas was assigned to support the landings at Omaha Beach.

Early in the morning, the initial bombardment occurred. “We came in my boat a little after the first attack at Normandy. You just can’t believe it, how many American men died at sea there, right at the entrance. There was just a number of men floating in the water,” he said.

Fischman left the ship under orders to recover wounded Rangers from Omaha Beach. “He had to push past all of the bodies floating in the water, thousands of bodies of dead and wounded soldiers, to pull out the wounded men and take them back to the emergency hospital on the ship,” said his wife of 74 years, Antoinette. “He rescued 35 men that day and only one of them was lost once they got back to the ship.”

The water was rough, and the boat was weighed down with over 30 men. On the way back, Fischman thought they were going to sink the boat or run out of gas. The choppy seas caused the USS Texas to drift from its previous position, leaving him to navigate the tumultuous waters. Once found, each person had to be unloaded one by one via a crane and stretcher.

After unloading all the men, Fischman asked if he could go back to recover more wounded. The captain peered through his binoculars onto the beach before telling Fischman to tie the boat up, as there were none left. That day, 6,603 American troops were either killed, wounded or declared missing.

For his service during World War II, Fischman was recognized with the National Order of the Legion of Honour, which is the highest French order of merit, and was decorated as a Chevalier (knight). American Veterans who served in World War II qualified for this distinction if they fought on French territory and in one of the four main campaigns of the Liberation of France.

Fischman returned to Alexandria as a civilian, where he enrolled at the National Art School in Washington, D.C. — now known as the Corcoran School of the Arts & Design at George Washington University. Here, he discovered his talent for sewing and dress design. His designs won a contest that shown and modeled at the Capitol Theatre.

Fischman opened his own business, Rojet’s Designs, where he provided service to several dignitaries and Miss Washington, D.C. He received other awards for his designs and opened several clothing and tailoring shops over his 55-year career as an accredited designer.