It is a great sorrow to have lost such a dear friend and inspiration to the world — Col. Joe Kittinger, who passed away Dec. 9 at age 94.

This humble man was truly my friend, family and personal idol. The pleasure of touching a small part of his world and accomplishments over so many decades was inspirational. He was looked up to by so many great people — astronauts, scientists, inventors, politicians, artists, all who called him friend, Colonel, partner, father, husband and often just Joe. 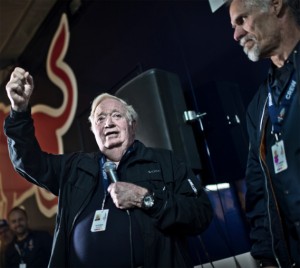 During his years in the Air Force, he worked closely with Dr. John Paul Stapp on safety systems for aircraft and space systems. As part of Stapp’s team he worked with companies including the David Clark Company to help develop early space suits, life support, egress and safety systems. Tasked with the question, “Can man survive in space?” Joe was instrumental in the Man-High and Excelsior programs where he and Stapp’s team studied effects of flat spin and partial pressure suits in near space. On his 34th parachute jump, Joe set a record for an assisted free-fall from near space wearing the recently developed pressure suit, stepping from a Stratospheric balloon platform and free falling with a drogue parachute from 102,800 feet (31.3 kilometers). Joe reached a speed of 614 mph being the first person to see the extreme curvature of Earth from such an altitude. His record held for 52 years. Stapp and Kittinger’s work on Stargazer and Excelsior laid the groundwork for the Gemini and Apollo space programs, high-altitude flight, egress and space safety. In 2012 Joe was Cap-Com capsule communication with Felix Baumgartner on Red Bull Stratos breaking Joe’s own record free-fall from102,800 feet set in 1960.

My dear friend died Friday, Dec. 9, 2022, in Florida with his loving wife, friend and partner -Sherry Kittinger — by his side along with his sons and members of his family. Joe was 94-years young and as sharp as a tack to the end.

We will miss you, my friend, but will never forget you or the inspiration you were to us. We will keep you alive with the stories we share with those who knew you and those who will come to know about you. Those stories will share the excitement of your adventures but also recall your life-risking experiences with the purpose of saving other lives. Your life making history in the sky was one that we mere mortals can only look to the heavens and dream about.