The F-35 weapons load training is designed to teach and enhance knowledge of preparation, operation, and safety to weapons load crew and maintenance members who will load munitions on the advanced F-35 platform in the near future.

“We teach them all the loading steps from start to finish,” said Staff Sgt. Kristopher Steele, 61st Aircraft Maintenance Unit lead crew chief and instructor. “When the crews come down, we teach them like they’ve never loaded before. We teach them the basics of how to make the aircraft safe for maintenance, handle munitions safely, work with the fuses and wiring of munitions, and perform munitions loading procedures. Once everything is safe, we teach them how to post-load, which is to look back and review everything.”

For students, the expectations are high, and the instruction is fast-paced and hands-on. In the training hangar, where a clean and emptied F-35 sits flanked by inert missiles and bombs for practice, Airmen move quickly from station-to-station and congregate around instructors teaching specific details about a particular weapon or system.

“When you get on the flightline, we expect you to know your job, to be proficient in nomenclature,” Steele said. “I expect you to be able to tell me everything you’re looking at, tell me all of the bomb prep, the rack prep, anything that is not included in the current loading.”

As is common with the first implementation of any new program, there are obstacles to overcome. The new technology presented in the aircraft increases the difficulty in implementing an expedient training course.

“The biggest challenge we have right now is simply that the F-35 is a new aircraft,” said Staff Sgt. Jeffrey Miller, 61st AMU lead crew chief and instructor. “There’s nothing really like it. It’s totally different from most aircraft.”

Not only do the instructors have to teach a new system that they’ve only grown accustomed to on their own, but the new Airmen hoping to gain that wisdom must do so through working with something that is different from anything else they’ve ever seen. 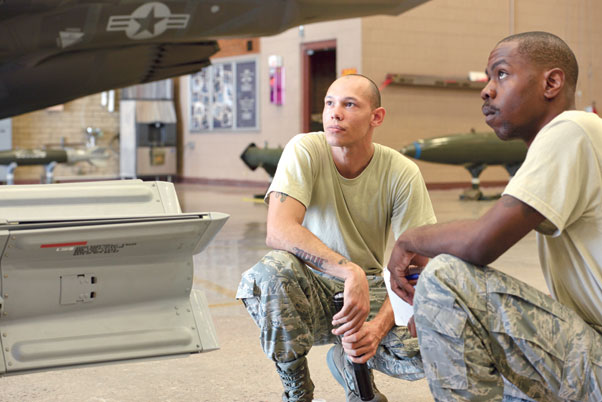 “The biggest challenge for the Airmen who come here is that they are fresh minds,” Steele said. “They’re new Airmen coming here straight from tech school. They don’t know what to expect because they’ve never seen these bombs or missiles before, and so we have to teach them from scratch.”

Even experienced loaders making the switch from older jets have a disadvantage, and typically have just as difficult a curriculum ahead of them as those who have never worked on a plane before now.

“For people coming in from the legacy jets, there’s a bit of a learning curve because it’s a completely different system as far as loading,” Miller said. “For people who were on F-15s and F-16s or any other fighter, moving from a fighter to another fighter is usually a pretty smooth transition. Everything is almost the same, but as far as the F-35 goes, it’s different.”

On traditional jets, munitions are ejected with explosive propellants upon launch. This isn’t the case on the F-35.

“Your traditional jet has what they call ‘carts,’ and those are explosives that fire off munitions,” Miller said. “On this jet, it’s all pneumatic.”

The term “pneumatic” describes the fact that the F-35 uses air pressure instead of explosives to eject its munitions.

“There are different hoses you have to hook up since you’re no longer putting impulse carts into the jet,” Miller said. “Now you’re just making sure the rack is powered by pneumatics. It’s the little things like that which you have to make sure everybody knows about. It’s still a hazard, but it’s a different kind of hazard from previous aircraft. You’re not necessarily worried about explosives now, but loading the jet presents an air pressure hazard.”

The changes in these systems are more a focus for the instructors now given the growing influx of maintainers and loaders seasoned on older jets.

“I can see a lot of F-16 maintainers here who are going to be transitioned to the F-35,” Steele said.

As Luke slowly redirects its mission to that of the F-35, efforts are actively being made to accommodate Luke Airmen by retraining them onto the new platform instead of simply sending them to other bases.

“Once the 63rd AMU opens up, we are going to take a couple of our load crews from the 61st AMU and transition them to the 63rd, and then probably take some from the 309th and 310th as well,” Miller said.

One break from the difficulties being faced is the adoption of the new autonomic logistics information system.

“We’re using what they call ALIS,” Miller said. “On legacy jets like the F-16, you have one program you order your parts from and do maintenance on, you have maintenance forms, and then you have your technical orders. In ALIS, it’s all in one, so you can check your aircraft forms, and also look to see if there is any maintenance you need to do on the aircraft. If you need to order parts you can order parts. If you need to look at your TOs you can look at those. So instead of going through multiple systems and programs, you can do it all in one.”

ALIS is a welcomed alternative to the checklists and paper forms convoluting maintenance work on older aircraft, but it is still a new utility that the instructors must teach to maintainers and loaders before they are able to fully and effectively use the system.

Despite these challenges, the instructors are enthusiastic about leading the course, hopeful for its development and appreciate their role in shaping the future of the F-35 fleet.

“Like anything else new, there’s going to be bumps, but it’s a lot of learning and working toward making it better,” Steele said. “That’s the mindset and the motivation for the Airmen when they come down here. To adapt and overcome.”