The 56th Force Support Squadron held its monthly “Hearts Apart” event for families who have been separated by deployment or remote assignments.

The Glendale Police Department sponsored the event after contacting Master Sgt. Anthony Drew, 56th FSS Readiness NCO in charge, about wanting to support and give back to the families of the Luke community.

“Glendale police approached me and wanted to do something for the families at Luke,” Drew said. “I told them about the events we do at Luke. They were completely on board and wanted to sponsor this event.” 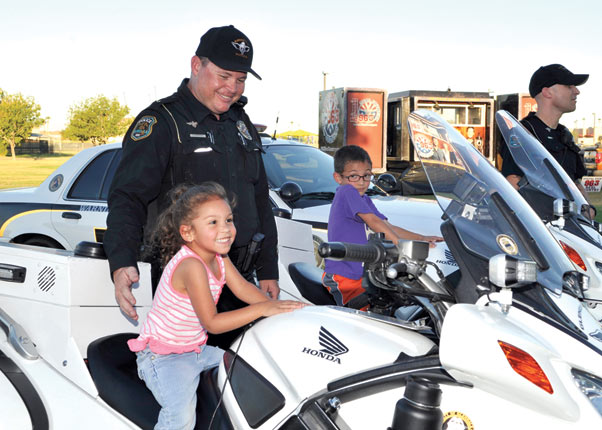 A police officer watches as a child smiles for a photo while sitting on his police motorcycle during the event. Families enjoyed an evening of bounce houses, K-9 working dog play time, food and music.

Children ventured in and out of the vehicle, exploring to their hearts’ content. Children were allowed to sit on the Glendale police motorcycle unit’s motorcycles and enjoyed food served by the first responders.

“We put on this barbecue for the families to show support for their sacrifice,” said Officer Jeff Pittman, Glendale policeman neighborhood response squad. “We spoke with Sergeant Drew, and he told us about the deployments and how many families it affects, so we wanted to have all the families come out. My father served in the Navy and was constantly deployed. For what my family went through, we wanted to be able to give back.” 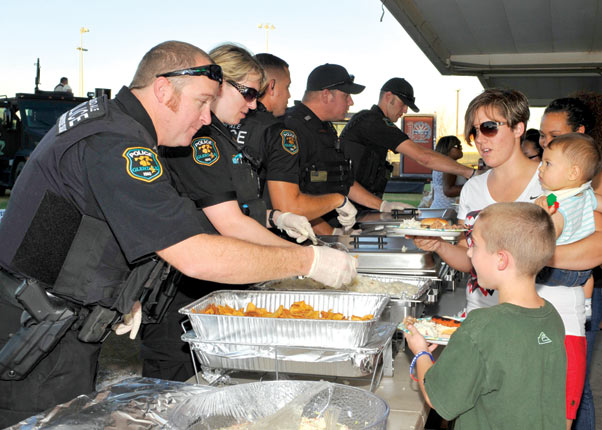 Glendale police provided a meal for military dependents at the event.

The 56th FSS holds a monthly event for families who are separated by deployments or remote assignments. These events are for families to come out and enjoy a time of togetherness and to be brought together by the separation of their loved ones.

“It brings us out to be with other people who also know what it is like to have their spouse away,” said Brooke Preston, attendee. “Especially for the kids, it is really hard for them with their parent gone and to be able to be with other families who know what that’s like is really important for us. These events help those of us who live off base come into the Luke community as well.”