Military veterans are the reason why the military is where it is today. With their dedication, they paved the way for America’s freedom. When veterans or service members pass away, they may get provided full funeral honors to recognize their time in service. That’s where the honor guard comes in.

The Luke Air Force Base Honor Guard team spends numerous hours training and preparing uniforms while on and off duty to provide proper military service at a variety of events. 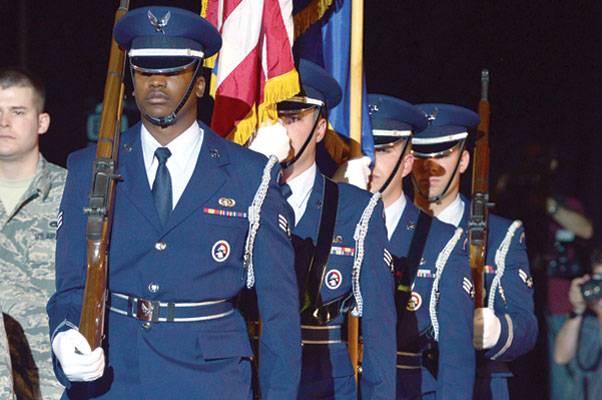 The Luke Air Force Base Honor Guard prepares to post the colors March 14, 2014, during the F-35 Lightning II unveiling ceremony at Luke Air Force Base. The honor guard performs more than 100 details a month, which includes color guard, flag ceremonies and funerals.

“It’s a lot of heavy training when you first start honor guard,” said Senior Airman Smitty Burgees, 56th Medical Support Squadron biomedical equipment technician. “The first month is the toughest. We spend that time learning everything from rifle movements to flag folding. After the first month, it’s just a matter of execution and making sure you keep your knowledge up after the first month of training.” 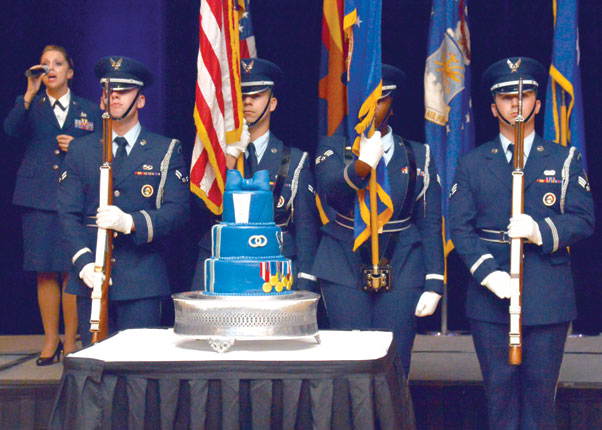 Luke Air Force Base Honor Guard presents arms during the singing of the national anthem Sept. 12 at this year’s Air Force Ball at the Wigwam Resort in Litchfield Park. The Luke Honor Guard performs military honors on and off base in the Arizona community.

For new honor guard recruits, the mandatory training is a one-month program before they participate in their first military function.

“During those first two weeks, it’s about 80 hours of training,” Galero said. “All the basic moves and funeral honors will be learned during that time. By the fourth week they will be going on details.”

In addition to the continuous training, honor guard members must keep their uniforms in order at all times.

Luke honor guardsmen are diligent to perform the best honors they can during funeral honors.

“As I tell the Airmen, we have 10 minutes to relieve the veteran’s service to his country,” Galero said. “We always strive to give veterans the respect they deserve.”

Honor guardsmen practice a drill in the parking lot adjacent to Bldg. 156. The Luke honor guard spends numerous hours training and preparing their uniforms while on and off duty to provide proper military service at a variety of events.

Honor guard ceremonies have an effect on many who observe them, but also those who perform them.

“It a humbling experience,” Burgees said. “It will give anyone who joins the honor guard a completely different perspective of the Air Force. When we go out for details, they don’t see us as Luke members; they see us as the United States Air Force. If an Airman gets the chance to join, they need to hop on that opportunity.”