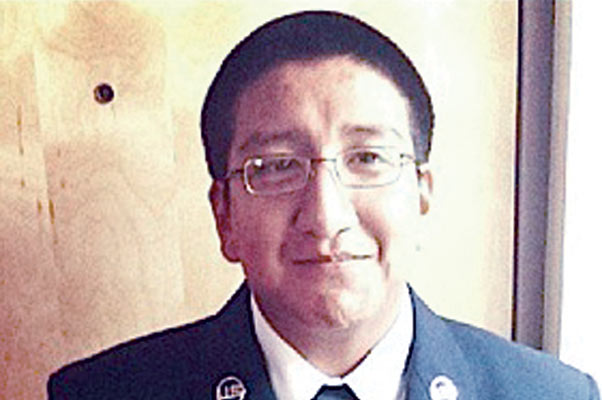 Editor’s note: The following is a story of Airman 1st Class Wheeler Nichols, 56th Dental Squadron, written by his father.

Our son loved the U.S. Air Force. His young life ended in service almost exactly one year ago.

Wheeler D. Nichols was born in Peru December 1991. A few weeks later, after a lengthy adoption process, my wife and I boarded a 747 in Lima with our infant son and flew home to Los Angeles.

We lived in an old house on Rome Drive at the top of Mt. Washington. Wheeler became an All-American California kid, and we were fond of calling him our Inca Prince. He grew to become a fan of the Beatles, horror movies, Halloween, Audrey Hepburn, the San Francisco 49ers and the TV series, “House” and “Friends.”

His mother, Barbara, helped him become a good cook. He was fascinated with trains, new technology and movie-making. He made three short horror movies, wrote the scripts, and brought in actor friends who doubled as crew.

Wheeler was also a sharp-dressed young man as a civilian or in uniform.

After graduation from high school, Wheeler enrolled for classes at Glendale Community College, near Los Angeles, where he studied life sciences.

When he wasn’t sure about his future, we encouraged him to consider the Air Force. Eventually he signed up and chose a career field — dental assistant.

I remember an afternoon in February 2013. We were gathered on the light-rail platform at the foot of Mt. Washington, waiting for the Gold Line train. Wheeler was leaving us for the U.S. Air Force. The train arrived, the doors slid open and we said our goodbyes. He clutched his bag, boarded the train and it resumed its journey, taking our boy away. We watched until it was out of sight, and went home to our strangely quiet house.

Wheeler was bound for Burbank Airport and a flight to Lackland AFB, where he would do his basic military training.

One of his first experiences at Lackland was with the base barber, who sheared his beautiful longish black locks. I wrote a poem and sent it to him in a letter:

A Beatle-topped Inca from Rome

He joined the Air Force,

to serve his country of course.

But now he has nothing to comb.

On the first day of BMT, Wheeler was assigned a weapon, issued uniforms and placed with Flight 255, 322nd Training Squadron. He embarked on a tough, rigorous program designed to transform young civilians into Air Force warriors.

A BMT buddy wrote of his experience with Wheeler.

”Almost every single day in basic training, he would make my bed because I had somewhere to report to and didn’t have time. He helped me fold my clothes when I just couldn’t get it. He talked to me all the time and was just a great person.”

Wheeler was allowed a few short phone calls home, and we treasured them. He was homesick and a little weepy at times. The calls were always cut short by a drill sergeant loudly advising recruits to “Wrap it up! Now!

I told Wheeler in a letter that the Air Force was tearing him down in order to build him back up. At graduation, one of those tough drill sergeants shook his hand and said, “Good job, Nichols,” and coined him. During his short career in the Air Force, Wheeler collected ten coins, one of them from Brig. Gen. Mike Rothstein, 56th Fighter Wing commander.

Wheeler’s next stop was Fort Sam Houston and dental assistant tech school. He was nicknamed ‘Disney’ when he revealed his mother was a retired Hollywood scenic artist at Disney and other studios.

After tech school, he was shipped to the 56th DS at Luke where the motto was “Putting the Bite in the Fight.” He wore scrubs, a surgical mask and worked with Capt. (Dr.) Elizabeth McCourt. One of the patients told us Wheeler had put him at ease in the dental chair. His goal was to become an oral surgeon.

During this time, Wheeler earned his airman first class stripes. He was looking forward to becoming a senior airman in August 2015.

Wheeler came home on leave as often as he could. On weekends, we often shared a video call.

In late September 2014, he developed flu-like symptoms with horrific headaches. He went to work on a Monday, but on Tuesday he was so ill and disoriented at the clinic that co-workers called an ambulance to rush him to the emergency room.

We got the news and prepared to go to his bedside. Meanwhile he was placed on life-support at the ICU. When we arrived, he had a ventilator tube planted in his mouth. He had just enough strength to open his eyes for a few seconds to see that we were there. The tube prevented him from speaking. A tear rolled down each side of his face.

Clinic co-workers, officers and enlisted personnel alike visited his bedside and stood vigil in the ICU at Barrows Neurological Institute in Phoenix. They autographed a new 49ers football and gave it to us to present to Wheeler. He never saw it.

Almost three weeks later, at 3:22 a.m. on Oct. 11, his heart stopped. We were there, holding his hands and talking to him.

Despite numerous tests and an autopsy, the cause of the seizures is unknown.

A large Air Force crowd attended services for Wheeler at the base chapel.

Wheeler’s body, escorted by dental technician Master Sgt. Pablo Vales, arrived at Burbank Airport, The entire airport was shut down as his aircraft landed. Six Air Force Honor Guard members carried his flag-covered casket from the cargo hold. As they crossed the tarmac, members of the Burbank police and fire departments snapped to attention and saluted. Our son, Airman 1st Class Wheeler Diego Nichols, had come home for the last time.

He was a warrior.

Veterans Day: A time to honor those who have served