“I should have been shot down,” he said, recalling one of his 133 missions in his F-4 Phantom II during the Vietnam War. “I was patrolling a river just above the demilitarized zone. There was a large cargo boat the enemy used to transport supplies, so I figured I might as well sink it. I established a run to drop a rocket into it. I should have noticed it was tied shore to shore, which was unusual. It turned out to be a trap.” 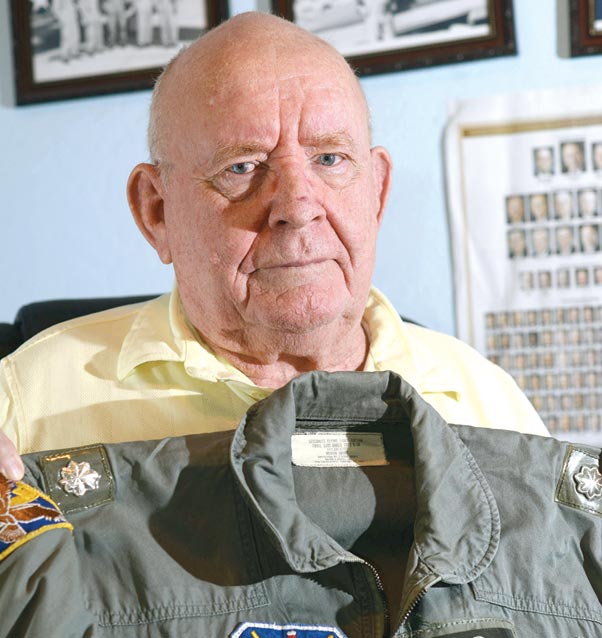 Retired Lt. Col. Alma Skousen displays his flight suit Oct. 30 in his Mesa home. Skousen flew combat missions in the Korean and Vietnam wars, was awarded the Distinguished Flying Cross for acts of heroism and extraordinary achievement while participating in an aerial flight. Skousen ended his flying career with more than 6,000 flying hours.

“Just as I was in my run pretty good, they were over me, under me, behind me,” he said. “I was taking fire from everywhere. Somehow every shot seemed to go behind my airplane, and I made it out with my life.”

Skousen’s love for aviation began at a young age.

“When I was a little boy I saw an airplane flying,” Skousen, now a resident of Mesa, said. “It was 1934. I got my brother to go with me to the little dirt strip the pilot landed on. At that time, pilots wanted to help anybody who was interested in airplanes. They wanted to keep it going. Talking to that pilot was the beginning of my dream to fly.”

Skousen enlisted in the Army Air Corps fresh out of high school in 1943 during World War II.

“I wanted to be a hot-shot fighter pilot, but I didn’t get to fly at that time,” he said.

Skousen became a C-54 Skymaster flight engineer, but held onto his childhood dream of being a pilot. When the war ended, so did his enlistment. Skousen went back to civilian life until he joined the relatively new Air Force in 1951. 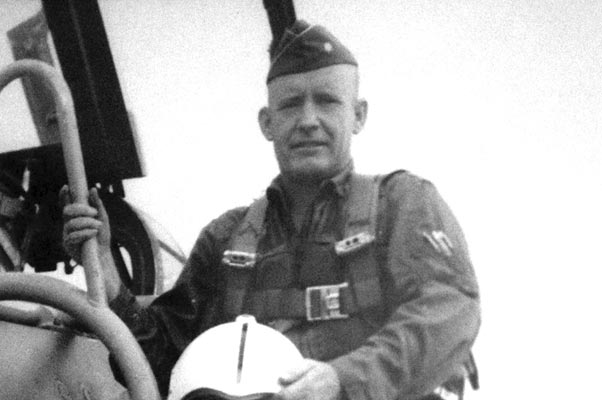 Lt. Col. Alma Skousen poses with his F-4 Phantom II in 1967 during a Vietnam deployment. In the six months Skousen was in Vietnam, he flew 133 missions.

“I went to flight school at Williams AFB right here in Mesa,” he said. “I went off to the Korean War in 1952 flying air-to-ground missions as part of the 8th Fighter Bomber Wing in an F-80 Shooting Star.”

His missions were dangerous from the very start.

“My first mission there was bombing a place just across a demilitarized zone on the hillside between North and South Korea,” Skousen said. “I had a little scare because I found out later there was a flight of MiGs waiting to surprise attack us, but we made it out before they acted.”

Skousen had become no stranger to danger, but it was during a noncombat flight in the U.S. that he survived a crash.

“I had an accident, the only one I ever had, in a T-33 Shooting Star,” he said. “I was stationed at Travis and they sent me up to Washington to be a part of an inspection team. Before returning to Travis, I noticed there was something wrong with the turbine wheel. I prepared to hop on a C-47 Skytrain to fly back when the sergeant ran up and said they got the parts to fix my jet if I wanted to wait. So I did.”

After hours of repairs, the maintainers cleared Skousen’s jet for flight.

Skousen’s wheels touched down on recently plowed farmland, but his body paid the price.

“When the jet hit the ground the canopy and my helmet flew off, and I got three compression fractures of my vertebrae. I spent a month-and-a-half in the hospital. That was in 1957, and I worried that my flying career might be over.”

Skousen recovered and in 1967 was sent to fly combat missions in Vietnam. On one occasion his back-seater and he were flying over Hanoi, Vietnam.

“He said, ‘We’ve got a missile on our tail!’ It was too near to do anything,” he said, laughing at the memory of his fellow Airman’s fear. “It came right by us which was concerning because it had a proximity fuse.”

The proximity fuse had a radio transmitter and receiver that detected an object in its path. When it came within a specified distance from the target, it would explode and, often packed with razor-sharp coils or other destructive contents, would destroy the target.

“But this time it didn’t explode,” Skousen said. “It went on up about 10,000 feet above us and exploded there, so we made it out.”

Skousen’s illustrious career continued for many years. He worked his way into leadership positions and eventually ended his flying career at Luke Air Force Base as the commander of the 311th Tactical Fighter Training Squadron, where he trained young pilots to be war-ready Airmen.

These stories represent a mere glimpse into the life of Skousen who spent his life in service to his country. He was the recipient of the Distinguished Flying Cross for acts of heroism and extraordinary achievement while participating in an aerial flight. But most importantly, Skousen left a legacy of excellence for those who came after him to emulate, and has advice Airmen now.

“Work hard,” Skousen said. “People nowadays want to start at the top and not at the bottom. I had to do a lot of things I didn’t want to do, but I did them because you start at the bottom and work your way to the top. Always do your best.”

Luke one of three bases OK’d for shorts on flightline

Luke Exchange keeps ‘Thanks’ in Thanksgiving