As the Air Force continues to develop their newest fighter jet, the F-35 Lightning II, the 33rd Fighter Wing ensures the airmen tasked with taking care of it receive the training they need to advance with it.

Crew chiefs who have worked alongside the F-35 since its production, have transformed into a new breed of maintainer, capable of navigating the upgrades a fifth-generation fighter jet will go through.

Crew chiefs start early, preparing jets for the first sortie of the day at 7 a.m. Throughout the day, these airmen maintain the mechanical integrity of the planes before and after sorties. Unlike other maintainers, crew chiefs perform routine and preventative maintenance on the entire aircraft, as opposed to focusing on a particular system or subsystem. On the flightline, it’s these Airmen’s job to guarantee everything on the aircraft is upheld according to exacting standards to keep pilots safe while flying.

“When I’m out on the flightline, I make sure I know — confidently — the jet is going to come back,” said A1C Emily Peil, a 33rd Aircraft Maintenance Squadron crew chief. “(The pilot) takes the chance and trusts me to get them back. It is a necessity we don’t lose jets out in the field.”

Crew chiefs at the 33rd FW were introduced to the F-35 in 2011 and have worked with the jet’s development to train on the technological advancements the fifth-generation fighter offers.

With aerodynamic performance and advanced integrated avionics, the F-35 provides next-generation stealth, enhanced situational awareness and reduced vulnerability for the U.S. and its allies, according to the Air Force F-35A factsheet.

The 33rd FW is home to more than 20 F-35A variants with close to 80 crew chiefs to maintain them. Crew chiefs have plenty of opportunities to interact with the new capabilities of these aircraft as the jets participate in more than 65 sorties a week, said SMSgt. Ryan Edwards, the 58th Aircraft Maintenance Unit superintendent.

Edwards, who has been in the military for 18 years, 15 of which were in the maintenance career field, has experienced the technological advances from the legacy aircraft to the fifth generation firsthand. 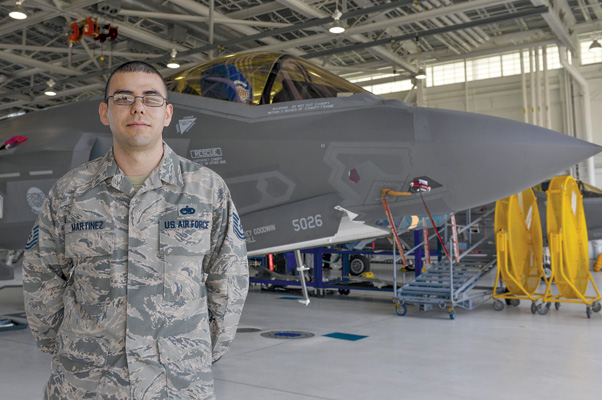 “The technical prowess of the maintainer has advanced alongside the technological advances of the aircraft (itself),” Edwards said. “Our crew chiefs, avionics and weapons personnel work hand in hand to solve complex issues that often cross over from one system to another due to data integration and sensor fusion.”

The abilities of the F-35 uncover new territory for crew chiefs at the 33rd FW, empowering them to create guidelines and regulations for future maintainers to follow.

“Technology guidance was not complete when the program started, so we had to fix problems as we met them,” said TSgt. Vicente Martinez, a 33rd AMS training monitor. “In some cases, we write guidelines for the F-35 (or) we run into incorrect guidance and have to stop and fix (it). That process can be frustrating because it’s time-consuming, but in the end it’s rewarding because it sets us up for the future.”

Martinez, a crew chief for 10 years, is also one of the maintainers selected to transition from a legacy aircraft, the F-16 Fighting Falcon, to the F-35.

“The transition was easy because of the previous experience I had,” Martinez said. “Most of the concepts are the same.”

One difference Martinez noted is the way day-to-day maintenance is carried out. In legacy aircraft, maintainers use visual gauges or other equipment to do inspections and operational checks. On the F-35, an internal computer within the jet performs the majority of these duties.

The computer completes a vehicle system built-in test that tells maintainers if there are malfunctions within the aircraft that require attention.

“(The computer) can tell (us) everything about the jet and help (us) control aspects of (it),” Peil said. “It gives (us) control (we’ve) never had on jets before.”

Unlike Martinez, Peil has no experience with legacy aircraft as she is part of the new generation of crew chiefs that graduate technical school specifically for the F-35. Peil foresees this program enhancing her career.

“I think being a part of (this program) will impact my career in a positive way,” Peil said. “The things we’re doing now will lead to great things in the future. We work day in and day out and in a few years we will see the impact of all of our work.”

The F-35 program has reached many milestones since its creation in 2006 and is scheduled to move to initial operational capability in fall 2016.

Other future plans for this program are to expand its fighter fleet within the U.S. and Italy to around 200 aircraft in one year. Within the next five years, the Air Force plans to have nearly 650 aircraft in the United States, Italy, France, Canada, Turkey, Australia, the United Kingdom and Norway.

“I think the F-35 program has developed a lot since the beginning,” Martinez said. “We have been training, growing, developing, hitting milestones and making history. The program will continue to develop in the same manner well into the future.”