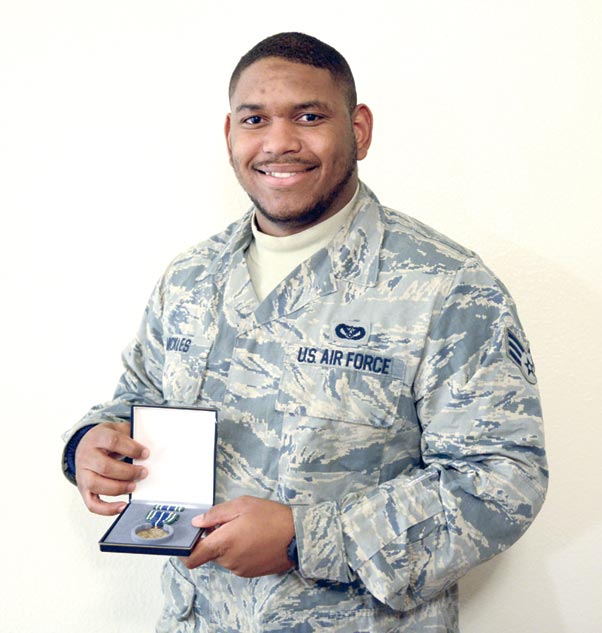 Every ribbon on an Airman’s ribbon rack tells a story. All have the basic training ribbon, most earn a ribbon for length of service but it’s the medals that tell a unique story.

“We set up the Army’s training ground which was essentially a campsite with tents and power,” Mickles said. “We earned the medals for providing them with our equipment including primary distribution panels and cables for their generators, without us, they had generators but no way to facilitate the power.”

“One of the crucial things we did was to provide a quick-response team,” Mickles said. “We responded to calls as soon as they came in. I had the opportunity to lead a few times, and we supported mission critical things like if the commander’s office or dining facility lost power.”

Being deployed has its ups and downs, both with distance and events happening while abroad.

“My favorite days were when there were concerts at the base,” Mickles said. “Anytime we had events like those, it was a great time. It brought everyone together. When you’re deployed all you have is each other. My worst day was when I found out my aunt had passed away. Distance makes the issues at home that much worse.”

A co-worker who deployed alongside Mickles knows him better than anyone else, Mickles said.

“He was great to have as a subordinate, and he did everything he could to get the job done,” said Staff Sgt. Anthony Coleman, 56th CES electrical systems craftsman. “He has a great work ethic and learned from others. He’s going to be a great supervisor when it’s his time.”

Mickles’ hard work paid off when he achieved something very few Airmen have.

“After receiving the medal, I felt really appreciated,” he said.

Mickles loved the experience and has some advice for Airmen going on their first deployment.

“Always keep an open mind while you’re there and do your time,” Mickles said. “While you’re there set some goals and know you will make it, and be stronger for it. Make sure to keep in touch with family and friends back home.”

Standing ready to serve her country

A Reunion of a Lifetime