The Luke Air Force Base Bryant Fitness Center hosted the first squadron physical test challenge Feb. 5 where Luke Thunderbolts faced off against a team of Marines.

Staff members, maintainers and regularly visiting Airmen from the Bryant Fitness Center formed the core of the Air Force team which faced off against a group of Marines from the 6th Engineer Support Battalion in a series of physical challenges. The challenges were designed to imitate the various PT tests of the different branches.

“It was a good, fun morale-booster, which we hope will kick-off into a base-wide event,” said Shawn Barkhaus, 56th Force Support Squadron fitness center maintenance team member. “The challenge brings out the competitive nature in all of the contestants and allows us to push each other while still having a good time.” 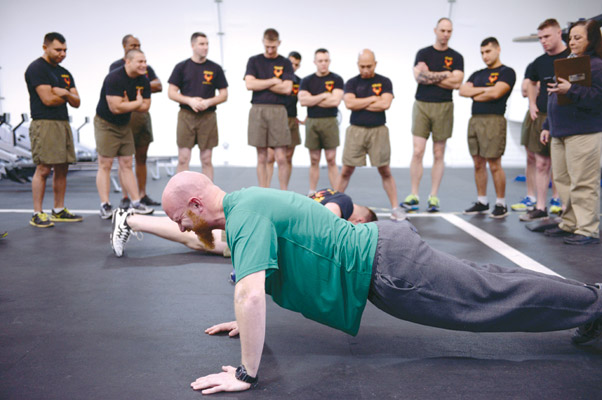 Barkhaus pumps out a few more pushups before time runs out in an attempt to beat his Marine opponent during the challenge. Teams from different squadrons or units compete at the fitness center’s PT squadron challenges in a variety of PT-related exercises.

The challenge included pushups, sit-ups and a one-lap relay race on the base track.

“I chose to structure the challenge based on the Air Force fitness assessment, because the Marines didn’t know what it was,” said Sherri Biringer, 56th FSS fitness center fitness specialist supervisor.

Although the Marines came out on top and won the challenge, the Air Force team fought to a close finish and is confident their successors may best the current victors, especially with even numbers and a deeper pool of contestants from which to draw.

“We did well on the pushups and sit-ups, but the Marines edged us out during the run at the end,” Biringer said. “I think this helps to show the other squadrons they may be able to beat these guys.” 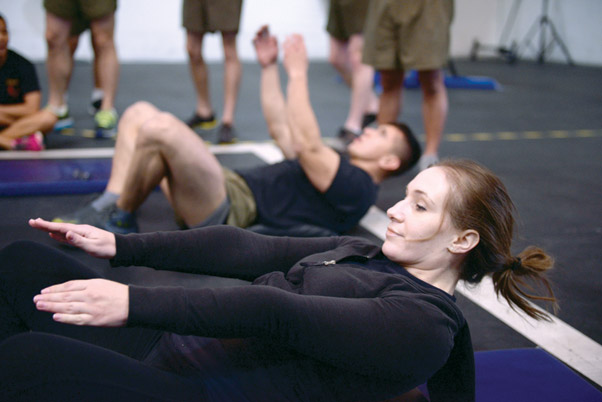 Jemia Fournier, fitness center sport specialist, competes against a Marine to complete the most sit-ups during the squadron the challenge. Teams competed during the event by rotating through members to complete a series of exercises in the fastest time.

Biringer hopes all of the base’s squadrons will answer the call and take up the challenge this year as it progresses to prove who is truly the fittest at Luke in 2016.

“Now that the Marines have the trophy, they can challenge or accept a challenge from whomever they want,” Biringer said. “I believe the 56th Communications Squadron has already called out the victor for the next challenge.” 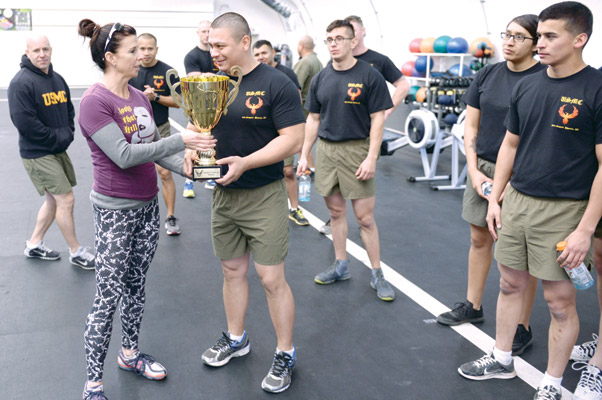