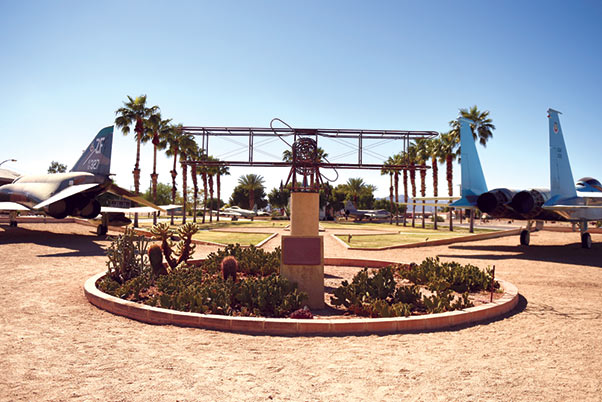 The Luke Air Force Base Air Park is dedicated to the men and women who are serving or have served at Luke and the heritage of freedom they imparted to the nation.

The nine airplanes on display are examples of the types that have served at Luke. They are the F-104 G Starfighter, T-33A Shooting Star, F-84F Thunderstreak, F-86F Sabre, F-4 Phantom II, AT-6 Texan, F-100C Super Sabre, F-15B Eagle and the F-16A Fighting Falcon.

At the entrance to the Luke Air Park sits a two-third-scale SPAD XIII wire frame model as a memorial to 2nd Lt. Frank Luke Jr., who shot down 18 enemy aircraft in just nine missions in World War I. It was constructed in 1992 from copper tubing by retired Master Sgt. Delbert Styles and Staff Sgt. William Harrick Jr.

The park also contains memorials to those who received the Medal of Honor during the Korean and Vietnam wars and those from Arizona, for which Luke was one. There are several plaques of appreciation from the German air force and German navy for training German fighter pilots at Luke Aug. 23, 1957, to March 16, 1983.

Chaplain’s thoughts … Getting back up