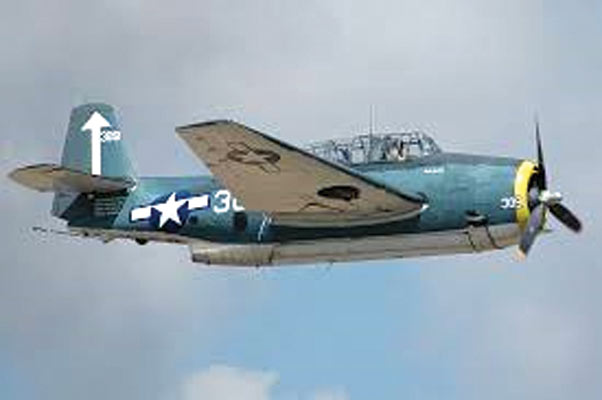 The roar of the TBM Avenger echoed off countless carrier decks throughout the world more than 65 years ago. Constructed in 1940 as a replacement for the obsolete Douglas TBD Devastator, Grumman’s team ended up creating one of the most influential aircraft of the Second World War.

The Avenger’s line of service began when a group of six Avengers took off on June 4th, 1942 as part of the Battle of Midway. Unfortunately, all but one of the six Avengers launched were shot down. This bloody initiation into combat caused the Navy to lose faith in the potential of the Avenger and the idea of torpedo attacks as a whole. However, after this harsh baptism under fire, the TBM would prove its lethal ability while it fought in every carrier-versus-carrier battle of the war. 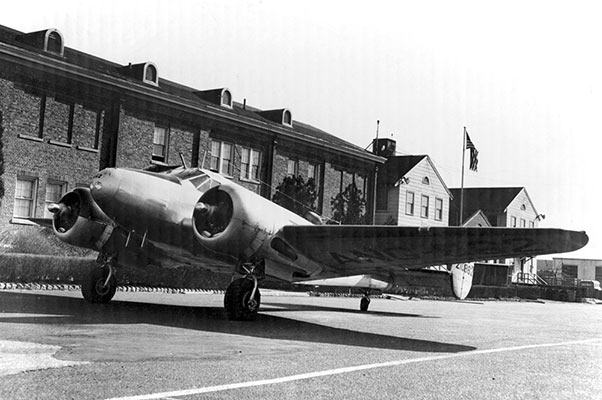 The Model 18 Twin Beech twin-engine aircraft were designed by Beech as a response to global tension in the late 1930s. After the prototype took flight in 1937, China issued a order amounting to $750,000 to convert these aircraft into light bombers, but only 39 were delivered by the time China entered WW2 in Jul 1937. As the United States geared for war, the Model 18 design were built as US Army AT-7 Navigator, AT-11 Kansan, and C-45 Expeditor aircraft and US Navy SNB Kansan, JRB Kansan, and UC-45 Expeditor Navigator aircraft. They were used as transports or trainers. After the war, the US Air Force kept C-45 aircraft in use until 1963, Navy SNB aircraft until 1972, and US Army C-45 aircraft until 1976. The production of the Model 18 aircraft did not stop until 1970, with the last model exported to Japan Airlines, making the design the longest continuous production of a piston engine aircraft; a total of nearly 8,000 were built during the production life. In addition to the production record, Model 18 also held the most US Federal Aviation Administration-approved Supplemental Type Certificates of any aircraft design (over 200), making it the most modified American aircraft. 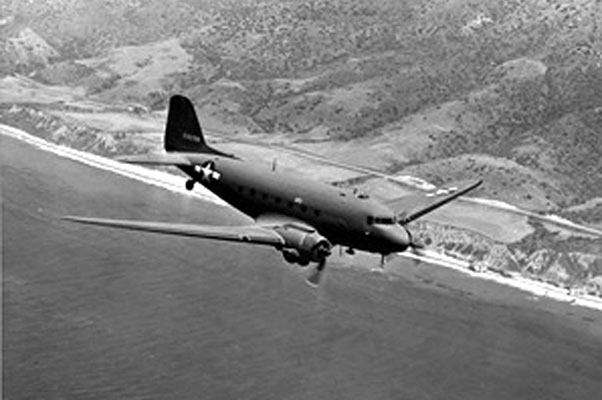 The military career of the Douglas DC series began in 1936, when the U.S. Army Air Corps ordered a pair of DC-2 commercial transports under the designation C-32. A contract followed for 18 DC-2s in the C-33 freighter configuration and two more as C-34 staff transports. Then, in 1937, the U.S. Army ordered a plane built to its own specifications. It was a hybrid design that combined the fuselage of the DC-2 with a DC-3 tail. This was the sole C-38 prototype, and it led to 35 production versions called the C-39. The C-39 represented the first serious effort by the Army to establish an airlift capability.

By 1941, the old Air Corps had been transformed into the Army Air Forces, and it selected a modified version of the DC-3 — the C-47 Skytrain — to become its standard transport aircraft. A reinforced fuselage floor and the addition of a large cargo door were the only major modifications. Other changes included the fitting of cargo hooks beneath the center wing section and the removal of the tail cone to mount a hook for towing gliders.

As a supply plane, the C-47 could carry up to 6,000 pounds of cargo. It could also hold a fully assembled jeep or a 37 mm cannon. As a troop transport, it carried 28 soldiers in full combat gear. As a medical airlift plane, it could accommodate 14 stretcher patients and three nurses. Seven basic versions were built, and the aircraft was given at least 22 designations, including the AC-47D gunship, the EC-47 electronic reconnaissance aircraft, the EC-47Q antiaircraft systems evaluation aircraft and the C-53 Skytrooper.

Every branch of the U.S military and all the major allied powers flew it. The U.S. Navy version was the R4D. The British and the Australians designated it the Dakota (a clever acronym composed of the letters DACoTA for Douglas Aircraft Company Transport Aircraft). The aircraft operated from every continent in the world and participated in every major battle. By the end of World War II, more than 10,000 had been built. For all of its official and unofficial names, it came to be known universally as the “Gooney Bird”; General Dwight D. Eisenhower, Supreme Commander of Allied Forces in Europe, termed it one of the most vital pieces of military equipment used in winning the war.

The North American B-25 Mitchell, a twin-engine bomber that became standard equipment for the Allied air forces in World War II, was perhaps the most versatile aircraft of the war. It became the most heavily armed airplane in the world, was used for high- and low-level bombing, strafing, photoreconnaissance, submarine patrol, and even as a fighter. It was distinguished as the aircraft that completed the historic raid over Tokyo in 1942.

It required 8,500 original drawings and 195,000 engineering man-hours to produce the first one, but nearly 10,000 were produced from late 1939, when the contract was awarded to North American Aviation, through 1945. 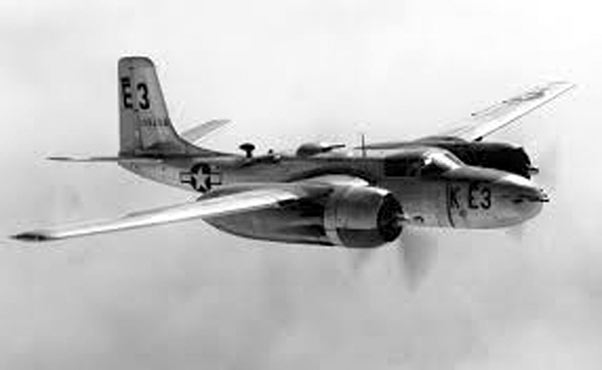 The Douglas A-26/B-26 bomber was the only American bomber to fly missions in three wars. After World War II, it served as a first-line bomber during the Korean War and during the Vietnam War. Douglas started the A-26 in 1941 to follow the A-20/DB-7 Havoc bomber.

Douglas built 2,503 A-26/B-26 Invaders. During production, a number of modifications were progressively introduced so that by 1948, the A-26 was one of the few wartime aircraft types still in service with the post-war U.S. Air Force. When the famous Martin B-26 Marauder retired and the Air Force deleted the designation “A” (for attack category), the Douglas Invader took on the B-26 designation.

Invader versions included the A-26D and A-26E light bombers, GA-26C ground training aircraft and the KA-26A tanker. Some A/B-26s were equipped for photo reconnaissance, and during the 1960s, some surplus B-26s were used to tow targets. The last U.S. military Invader was retired in 1972 and donated to the Smithsonian’s National Air and Space Museum. 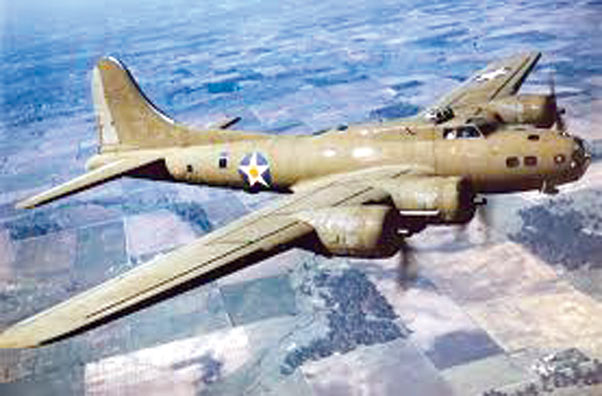 On July 28, 1935, a four-engine plane took off from Boeing Field in south Seattle on its first flight. Rolling out of the Boeing hangar, it was simply known as the Model 299. Seattle Times reporter Richard Smith dubbed the new plane, with its many machine-gun mounts, the “Flying Fortress,” a name that Boeing quickly adopted and trademarked. The U.S. Army Air Corps designated the plane as the B-17.

In response to the Army’s request for a large, multiengine bomber, the prototype, financed entirely by Boeing, went from design board to flight test in less than 12 months.

The B-17 was a low-wing monoplane that combined aerodynamic features of the XB-15 giant bomber, still in the design stage, and the Model 247 transport. The B-17 was the first Boeing military aircraft with a flight deck instead of an open cockpit and was armed with bombs and five .30-caliber machine guns mounted in clear “blisters.”

The B-17E, the first mass-produced model Flying Fortress, carried nine machine guns and a 4,000-pound bomb load. It was several tons heavier than the prototypes and bristled with armament. It was the first Boeing airplane with the distinctive — and enormous — tail for improved control and stability during high-altitude bombing. Each version was more heavily armed.

In the Pacific, the planes earned a deadly reputation with the Japanese, who dubbed them “four-engine fighters.” The Fortresses were also legendary for their ability to stay in the air after taking brutal poundings. 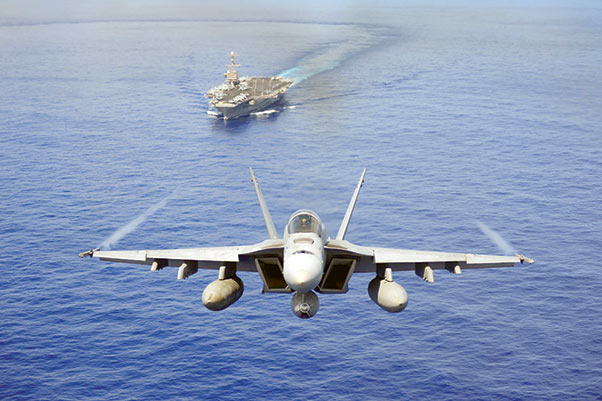 networking capabilities to accomplish specific missions. This “force multiplier” capability gives the operational commander more flexibility in employing tactical aircraft in a rapidly changing battle scenario. In its fighter mode, it serves as escort and fleet air defense. In its attack mode, it provides force projection, interdiction, and close and deep air support.