DAVIS MONTHAN AIR FORCE BASE, Ariz. — Pilots from the 47th FS with the Air Force Reserve Command demonstrated their experience and expertise on the ground and in the air by winning the Hawgsmoke 2016 competition.

The winning team, 47th FS, included the flight lead Capt. David Knighton and Capts. Tyler Shipman, Keith Madsen, and Simon Long. Knighton was selected as the overall Top Gun, which is the first time in the history of Hawgsmoke the flight lead from the winning team was was selected for this distinction. Together they proved the 47th FS is the best of the best in the Air Force.

“AFRC’s pilots are a very experienced group of aviators,” Knighton said. “Even though the 47th FS team was comprised of the four youngest members of the squadron, we were able to put up some formidable competition amongst a very talented group of pilots. These pilots have dedicated their entire military careers to providing the best close-air support possible to the front line Soldiers on the ground. I think, had our team not been brought up by such experienced A-10 instructor pilots, we would not have performed as well.”

The 47th FS also won the last competition in 2014 when it was hosted by the 355th Fighter Wing also at D-M. As the previous year’s winner it meant that the 47th FS was also the host of the event.

“Lt. Col. Brett Waring’s planning and execution of this competition surpassed all expectations putting together one of the finest and most well organized Hawgsmoke competitions I have ever seen,” said Col. Thomas McNurlin, 924th Fighter Group commander. “To showcase total force integration, lieutenant colonel Waring is assigned to the 47th FS, but is one of our regular Air Force active associate members leading the mission for AFRC.”

The three-day event was kicked off with a solemn Hawg remembrance ceremony for fallen comrades. Following the reading of the names of all fallen A-10 pilots, a missing-man formation flew overhead. At the conclusion of the ceremony, the participants drank a shot of whiskey then smashed the shot glasses in honor and remembrance of old friends and colleagues. 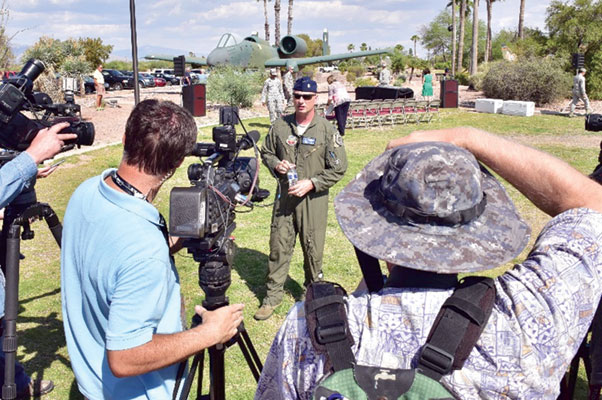 “This tradition among flyers dates back to World War I, when combat aviation first appeared in battle,” Waring said. “After a mission, the survivors were given a shot of whiskey to calm their nerves.”

The next day it was straight to business with four ships of A-10s from each of the 13 teams taking off and demonstrating their skills on the Barry M. Goldwater Range. This year each team had to drop bombs on target and then conduct strafing runs. The pilots were scored on accuracy and ability.

Waring explained the groups were tasked to ‘mass fires’ within a 10-minute window, with more than 60 individual targets and aim points. They had four tactical, overlapping threats to contend with that were appropriate for an opposed close-air support scenario that represented modern and legacy air defense systems (SA-15, 2S6, Roland II, and ZSU-23-4). Every unit successfully engaged approximately 20 targets within this window. The winners successfully targeted more than 30 while demonstrating an effective stand-off survivability with all manner of precision and accurate classes of weapons. The only restriction was, that they could not employ the gun.

“All of the competitors found the scenario to be extremely challenging tactically, and they all walked away learning more about employment options in such an environment,” Waring said.

“Winning Hawgsmoke in 2014 was an incredibly proud moment for me,” McNurlin said. “Being the first new unit equipped fighter organization in AFRC since the 944th FW stood up in 1987, we were working hard just to keep operating and not fail at the mission. When our pilots and maintainers went out there and proved they were the best in the Air Force, it quite frankly surprised me but definitely shows the quality of our Airmen in the 924th FG. I never thought in a million years we would win it again much less almost sweep all categories of the competition. Our pilots, maintainers and their AFRC jets did an absolutely incredible job and definitely showcased the 924th FG, AFRC and TFI at D-M.”

The first Hawgsmoke competition was in 2000 when A-10 units across the globe competed in ground attacks and target destruction.

“I would like to recognize our maintainers as well as those from our sister AFRC A-10 unit assigned to the 442nd Maintenance Group at Whiteman Air Force Base, Missouri,” McNurlin said. “They volunteered to help and sent a significant MX footprint here to lead operations from Snowbird which was the only way we were able to make this competition happen with our current 48 percent maintenance manning. I couldn’t be more proud of what our Airmen have accomplished.”