Teams composed of Airmen from aircraft maintenance units of the 56th Maintenance Group competed to be the first to complete the loading of weapons onto an F-16 fighting Falcon or an F-35 Lightning II.

“The competition brings the whole weapons community together and gives us something to compete for,” said Airman 1st Class Theodore Reyes, 61st Aircraft Maintenance Unit weapons load crewmember. “We’re able to see what we can do, and it makes us better at our job.”

“Having a little competition where everyone can go out and show off and have everyone cheer you on really raises your spirits and boosts morale,” Cox said. “It’s fun, and it reminds us that our work gets noticed.”

Airman Evan Holder, 309th AMU weapons load crewmember, agrees that the competition is helpful for exposing the load crew career field to other members of the Luke community. 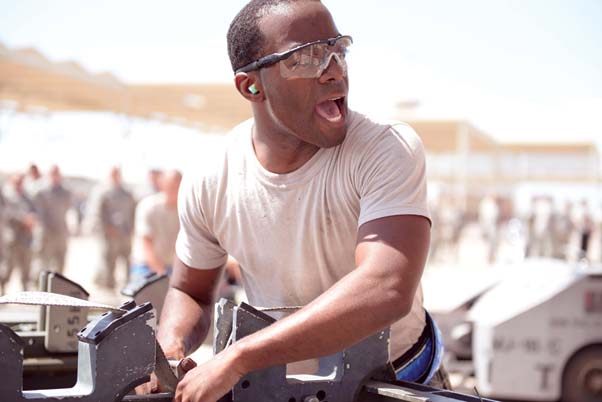 Staff Sgt. Trumain Cox, 309th Aircraft Maintenance Unit load crew leader, shouts directions to crewmembers July 1 during the annual Second Quarter Load Crew Competition at Luke Air Force Base. The competition pitted teams from different AMUs against each other in a race to complete the loading of weapons first onto either an F-16 Fighting Falcon or an F-35 Lightning II.

“Some people think we have an easy job,” Holder said. “When they come out to watch us during the competitions, they see what we do and we end up getting a lot of admiration from them.”

Teams were judged by criteria that included speed, adherence to procedure, teamwork and precision. In order to excel, teams had to demonstrate the ability to communicate effectively in a high-stress environment.

“Your load crew needs to have a good flow,” Reyes said. “Everyone needs to be able to trust each other to do their jobs so you can focus on doing yours.”

“Communication and trust are key,” Cox said. “As a crew leader, if my crewmember knows 100 percent of his job, I only need to know 50 percent of it to be able to help him catch slips.”

The F-35, being a newer and more advanced platform, presented different technical requirements for the 61st AMU team who loaded it.

“Between the F-35 and the F-16, we have different manuals and methods for how to load, but we’re ultimately doing the same thing,” Reyes said. “The differences are small enough that a loader from one plane should be able to simply learn how to load the other.” 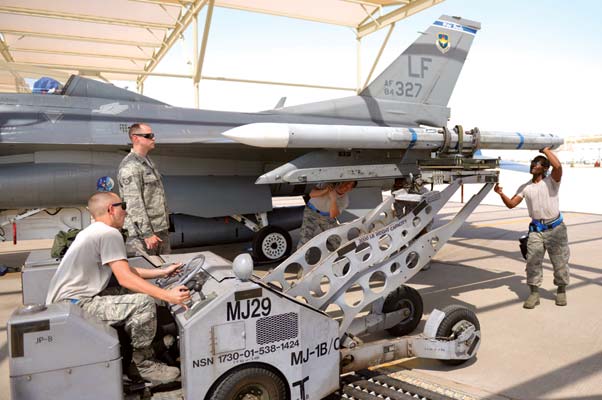 A weapons load crew from the 309th AMU loads an inert AIM-120 air-to-air missile onto an F-16 during the competition.

As Luke transitions from the F-16 to the F-35, eventual load crew competitions will feature the F-35 exclusively.

Once scores from the competition are compiled, the second quarter’s winning team will be announced and advance to the wing-level competition to compete for the 2016 title.