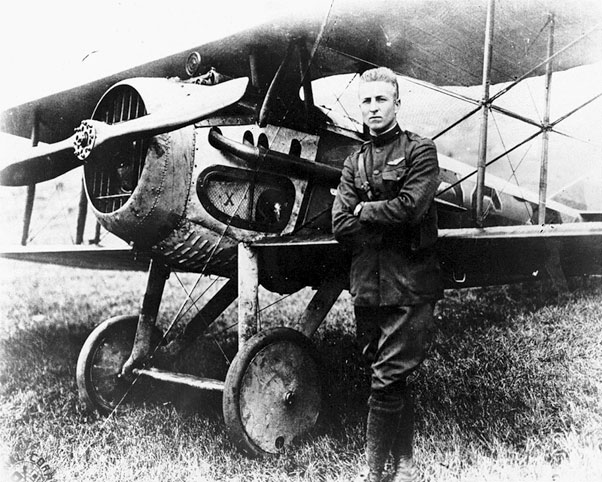 Imagine thinking of Phoenix with only 5,000 people and only one high school, the Salt River with running water, Arizona State University being known as Tempe Normal, and horses and horse-pulled buckboards as the standard means of transportation.

This setting was Phoenix in 1897, and on a warm May day of that year an aerial-combat legend was born. He would become the namesake of what is now known as Luke Air Force Base.

Frank Luke Jr. was born May 19 as the fifth of nine children. His parents had emigrated from Germany in 1874.

Aviation would define Luke’s life, but the irony is that at the time of his birth, airplanes were still on the drawing board and not yet a reality.

Junior would inherit his restless and adventurous approach to life from his father who, after arriving in New York, ventured out west and ended in the Phoenix area. There was no form of government until 1881, so life was a tough prospect, but through it all, the elder Luke, his wife, Tillie, and their children flourished.

Although the younger Luke lived a short life of 21 years, he crammed in more living than most people who live long lives.

As a youth, Luke was engaged in numerous activities, which included horseback riding, hiking and camping. He was known to spend days in the desert and mountains surrounding Phoenix.

What’s more, he was a gifted athlete playing numerous sports at Phoenix Union High School. Legend has it that he broke his collarbone during a football game, but refused to come out of the game. Luke was known for his grittiness and never-back-down attitude. While working at a copper mine, he was known to have participated in bare-knuckle boxing matches, and to show his graceful side, he taught dancing. He was also a deeply religious person.

However, Frank Luke Jr.’s world took a profound turn when the United States entered World War I in 1917. He enlisted in the aviation section of the Signal Corps Sept. 25 of that year.

He received his pilot training at Kelly Field, Texas, and Rockwell Field, California, and upon completing it was commissioned a second lieutenant in January 1918. He then sailed out of New York Harbor to his first assignment in France.

Luke would find himself at school again at the U.S. Aviation Instruction Center, Issoudun, France, which was followed by an assignment at Orly, France, to ferry new aircraft from the American Aviation Acceptance Park for front-line units.

Fast forward to July when Luke was assigned to the famed 27th Pursuit Squadron flying the SPAD XIII. The squadron was commanded by Maj. Harold Hartney, and soon afterward, he was replaced by Capt. Alfred Grant. Hartney assumed command of the 1st Pursuit Group.

Grant and Luke did not get along. It was the disciplinarian, by-the-book type versus the independent thinker. There is an old saying, “Some people go by the book, and others write the book.” Luke fit into the latter category, which got him into trouble from time to time.

Luke’s aerial combat debut started on the shaky side. His SPAD XIII wasn’t ready when the flight took off. He managed to take off later hoping to catch the flight over the front. It turned out to be a controversial flight because he landed long after the squadron returned. His airplane was riddled with bullets and Luke claimed to have shot down a German Fokker aircraft. However, his squadron mates, including Grant, doubted his claim because he couldn’t verify it.

The only exception was 1st Lt. Joseph Wehner. He believed Luke, and from that day forth the duo became inseparable friends.

Luke’s exploits in the next five weeks would be the stuff of legend. He earned the nickname the Arizona Balloon Buster because during this period he shot down 14 enemy observation balloons.

However, his Sept. 18 mission, while successful in shooting down enemy aircraft, would have a devastating ending. Luke’s best friend, Wehner, had been shot down.

The duo had a late takeoff time looking for enemy observation balloons. They successfully found and destroyed two balloons, but were attacked by a formation of German Fokker aircraft. Luke shot down both the lead aircraft and the wingman, but couldn’t locate Wehner, so he headed home. On his way, he encountered another enemy balloon and gave chase, causing it to crash inside friendly lines.

What’s more, he had shot down three airplanes and two balloons in less than ten minutes, a feat that has never been equaled to this day.

Unfortunately, his friend Wehner had been downed in enemy territory and died from his wounds. His death deeply affected Luke, leaving him sad and lonely. In the succeeding days he began to fly whenever he wanted and was occasionally absent without leave.

The loss of Wehner and battle fatigue were taking a toll on Luke. He had become moody and silent. As a result of these developments, Hartney ordered him to take leave for five days.

He returned Sept. 25, the one-year anniversary of his enlistment. His young life had four days left.

Luke flew missions Sept. 26, 28 and his finial mission Sept. 29. He was having constant conflicts with Grant, who realized he had no control over Luke. Grant talked with Hartney about authorizing Luke to fly as a lone wolf, but despite their conversation, Luke took off in his SPAD XIII without authorization. His unauthorized flight netted him two more kills. He landed at the French Aerodrome at Cigognes, where he spent the last night of his life.

Luke returned to the 27th Fighter Squadron base the following morning, Sept. 29. He gave Grant his report of the previous day’s mission and received a tongue lashing for flying without authorization. Grant grounded Luke for an unspecified period, but instead, he boarded his aircraft and took off to a forward airfield at Verdun, France. He was arrested on Grant’s orders. However, Hartney landed at Verdun soon afterward. Luke asked Hartney for permission to attack three observation balloons near Verdun. He received permission and took off on schedule.

What exactly happened during the mission is shrouded in mystery because there are a number of versions as to how he died.

It has been accepted by military historians that Luke successfully shot down the three balloons, but received a severe wound from a machine gun bullet fired from a hilltop about a mile from where he shot down the final balloon. The bullet entered under the right armpit.

Luke landed in a field near the small village of Murvaux, France, after strafing a band of German soldiers on the ground.

He was severely weakened by his wound, but made his way out of the aircraft and headed for a nearby stream. He collapsed a short distance later and died.

The Germans buried Luke the following day in the Murvaux cemetery. His body was retrieved two months later by American forces and buried at Meuse-Argonne American Cemetery and Memorial, Romagne-sous-Montfaucon, France.

Luke was posthumously awarded the Medal of Honor — the first aviator to receive this honor.

He flew 11 sorties in eight days shooting down 14 observation balloons and four airplanes.

Capt. Eddie Rickenbacker later wrote of Luke, “He was the most daring aviator and greatest fighter pilot of the entire war. No other ace, even the dreaded German ace, Manfred von Richthofen, known as the Red Baron, ever came close to Luke’s achievements.”

The Army Air Corps renamed the newly opened Litchfield Park Field to Luke Field June 6, 1941. Since that time, Luke Field/Air Force Base has trained and graduated more than 60,000 pilots who fly in the spirit and tradition of Lt. Frank Luke.

Contributors to this story include Richard Griset, 56th Fighter Wing historian, the National Aviation Hall of Fame and Wikipedia.

Wingman day: a time to come together

Secrets of the heart …