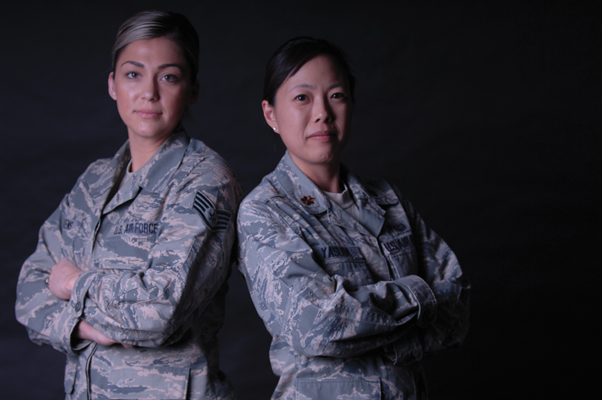 Maj. Marsha Yasuda had barely landed at the 163d Reconnaissance Wing’s Judge Advocate General’s Corps in 2012 when Lt. Col. Sotera Anderson assigned her one of the rarest and most important cases the unit had ever handled: the courts martial case of an airman from the 129th Rescue Wing at Moffett Federal Airfield.

The individual had been accused by two female airmen of entering the female side of open-bay barracks, and sexually assaulting them. For the four Article 120 specifications, the airman faced a maximum penalty of one year of civilian confinement, a dishonorable discharge, and a reduction in rank to E-1 (Airman Basic). The court martial, finally tried last February, was the first involving a California Air National Guardsman in the dozen or more years Anderson had been in the unit, she recalls. As luck would have it, Yasuda had just come to the unit—now part of the 163d Attack Wing—only months from active duty Air Force where she’d most recently served as a Deputy Staff Judge Advocate General (JAG) at the 42nd Airbase Wing, Maxwell AFB, Alabama, and had been involved in some 20 courts-martial, as both a prosecutor and a defender.

“I thought it would be in the best interests of the member we were asked to defend to have [Yasuda] represent him,” Anderson says.

But the case wasn’t going to be easy, even with her experience in litigation, Yasuda recounts. Precedents were unclear: The law had changed significantly in the years since the last California

Air National Guard (CANG) court martial, and kept evolving between the time the charges were preferred and the trial. For example, military units were now required to offer civilian courts the option of adjudicating cases; and witnesses have a new right to counsel in court-martial settings.

Yasuda adds, “the Uniform Code of Military Justice (UCMJ) covers federal courts-martial; the California Military and Veterans Code adopts the UCMJ, but adds its own specific provisions regarding courts-martial.”

In addition, California courts-martial differed from the active-duty Air Force, where “the rules are pretty clear, and military appellate courts have set precedents with respect to UCMJ jurisdiction and how that all applies,” Yasuda says. “I wouldn’t say [federal laws] conflict, but California’s state laws don’t necessarily mesh well.”

Grasping the shifting sand of the law proved the least of Yasuda’s problems. “It was a difficult case because it was he said/she said,” Yasuda explains. “This is a problem with proof in a lot of sexual assault cases. These cases are not the traditional, ‘jump out of the bushes, he raped you’ type of cases. They generally involve alcohol.”

Yasuda credits Staff Sgt. Adriana Stevens, a paralegal in the 163d Attack Wing JAG unit, for helping her immeasurably in preparation for the trial. “There was so much craziness going on behind the scenes before the trial started, [Stevens] was doing the work of a full-time active duty defense paralegal assisting with witnesses, coordinating with witnesses, taking care of last minute issues and putting out fires. Also, we were up at Moffett, so her [logistical] assistance was essential. She was stellar.”

Witnessing her first court martial, Stevens said the trial represented the culmination of all she’d been trained to do. And after months of helping Yasuda during the preparation phase, Stevens was able to contribute during the trial as well. “On the outside, we give a different interpretation.I was able to sit in back and observe as if I were a jury member,” Stevens recalls. “[Yasuda] asked me several times, ‘What did you pull out of that?’ The way in which you present the evidence, and ask the questions, is huge…I feel like it worked, because when she got to her wrap up, it was awesome.”

Yasuda presented critical testimony in the accused’s defense: “There were about 20 other females in that room, and none of them heard anything. When they woke up, they were shocked to learn that there was an allegation of a sexual assault.” In the end, the airman was found not guilty of three of the four counts, and guilty of one count of sexual assault.

The airman was sentenced to a bad-conduct discharge and reduction in rank to E-3. “It was a trial by fire for me and Sergeant Stevens because it was so new and different,” Yasuda concludes, “I believe courts martial numbers in general (including active duty) have gone down because of the reduced force numbers, I believe we may see more CA ANG courts-martial if there is an increase in accusations of sexual assault, given the current climate.”

Recognizing this possible trend, the Air Force recently stood up its first Special Victims Unit, “staffed by a cadre of specifically trained senior prosecutors whose primary responsibility is to try courts martial involving sex offenses, serious domestic violence, and crimes against children,” according to a 2013 report of The Judge Advocate General of the United States Air Force to the American Bar Association.