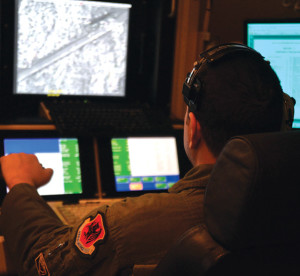 A sensor operator assigned to the 11th Attack Squadron trains in support of the launch and recovery missions March 2, 2017, at Creech Air Force Base, Nev. In addition to setting the standard of LRE training for MQ-1s and MQ-9s in the Air Force, the 11th also supports exercises involving these aircraft at the Nevada Test and Training Range. Exercises such as Red Flag, Green Flag and other advanced aerial combat training scenarios are made possible by the combined efforts of aircrews trained by the 11th ATKS FTU.

CREECH AIR FORCE BASE, Nev. — As technology on the battlefield changes and evolves, remotely piloted aircraft such as the MQ-1 Predator and MQ-9 Reaper, continue to provide combatant commanders with unblinking eyes and attack capabilities from the sky.

Some of these capabilities, such as being able to stay airborne for nearly 24 hours, see with high fidelity both night and day and operate virtually unseen, makes RPAs a highly effective platform in the war on terrorism.

To accomplish flight, two geographically separate aircrews work together: the mission control element and launch and recovery element. The MCE is responsible for executing the mission, while the LRE conducts successful takeoffs and landings. While being MCE certified is standard for all aircrews flying the MQ-1 and MQ-9, LR certification requires extra training.

The 11th Attack Squadron is a formalized training unit at Creech, where pilots and sensor operators are trained to become skilled in takeoffs and landings.

While the MCE conducts the mission from a stateside location, LRE aircrews fly the aircraft via satellite link. This link results in about a one second delay, which could affect their ability to safely land the aircraft. To combat this, the LRE deploys aircrews overseas to launch the RPA via a line-of-sight connection, eliminating the delay and providing real-time control over aircraft.

“It’s safe to say that if someone deploys as an LRE crew member, whether they are Airmen or foreign allies, they will be trained through [the 11th Field Training Unit],” said Master Sgt. Ryan, 11th ATKS operations superintendent. “Launching and landing the aircraft is one of the most critical parts of flying, and it’s fairly robust training.”

MQ-1 and MQ-9 pilots and sensor operators are selected to deploy in support of the LRE mission when they have gained 500 hours or more of experience in their airframe. Once an aircrew member is selected, their next stop is passing the Launch and Recovery Qualification course at Creech.

“The 11th FTU teaches seven different syllabi encompassing MQ-1 and MQ-9 launch and recovery,” said Staff Sgt. Brandon, 11th ATKS assistant NCO in charge of scheduling. “Going through the launch and recovery course takes two and a half to three months, and it’s about 150 hours of academics, simulator and flight training.” 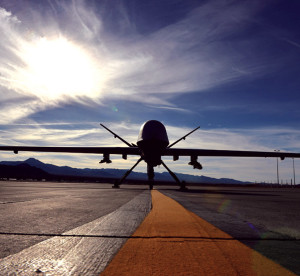 “Some people go their whole careers without being launch and recovery qualified,” said Stephen. “For those who seek more opportunities, or who volunteer for deployment, the 11th ATKS is an excellent place to distinguish yourself.”

Once qualified, LRE aircrews can further their knowledge by taking additional courses to keep current and proficient in their airframe.

“Not only do we train people to be LRE qualified, but we also offer the Instructor Upgrade Training course to train instructors who can in turn train others,” Ryan said.

In addition to setting the standard of LRE training for MQ-1s and MQ-9s in the Air Force, the 11th also supports exercises involving these aircraft at the Nevada Test and Training Range. Exercises such as Red Flag, Green Flag and other advanced aerial combat training scenarios are made possible by the combined efforts of aircrews trained by the 11th ATKS FTU.

From the ground to the sky, the 11th ATKS enables the mission of providing dominant, persistent attack to commanders downrange while keeping U.S. and coalition forces on the ground safe.

“Going through the course teaches you the expertise needed to handle the aircraft and be confident while doing it,” said Ryan. “Without the 11th ATKS, there wouldn’t be a single RPA in the sky.”