The Creech Diversity Council hosted a Coffee and Conversations event in honor of Pride Month featuring a panel of 432nd Wing LGBTQ+ Airmen at the Creech Air Force Base, Nev., Base Theater Jun 25, 2020.

Airmen and leaders from across the 432nd WG/432nd AEW sat together on a stage to initiate dialogue with their peers relating to their experiences as members who identify as LGBTQ+.

“Events like this provide an opportunity for members to share their stories and inspire others to find their voice,” said Lt. Col. Kaly, Director of Operations, 432nd Operation Support Squadron.

Every person’s story is beautiful and unique, she said. She then explained the sharing of stories is meant to be relatable, and can connect people.

However, the ice sometimes needs to be broken. One member of the panel who identifies as transgender said to their fellow Airmen, “we are not fragile, don’t tip toe around the questions, just ask.”

Tech. Sgt. Paris, NCOIC Protocol, 432nd Wing, was one of many who shared his story with those in attendance.

“From the moment I came out to my family, the only thing I was told was to ëjust be a good person,’” Paris said. “Ever since then I just did my best to be kind, work hard and make people smile.” 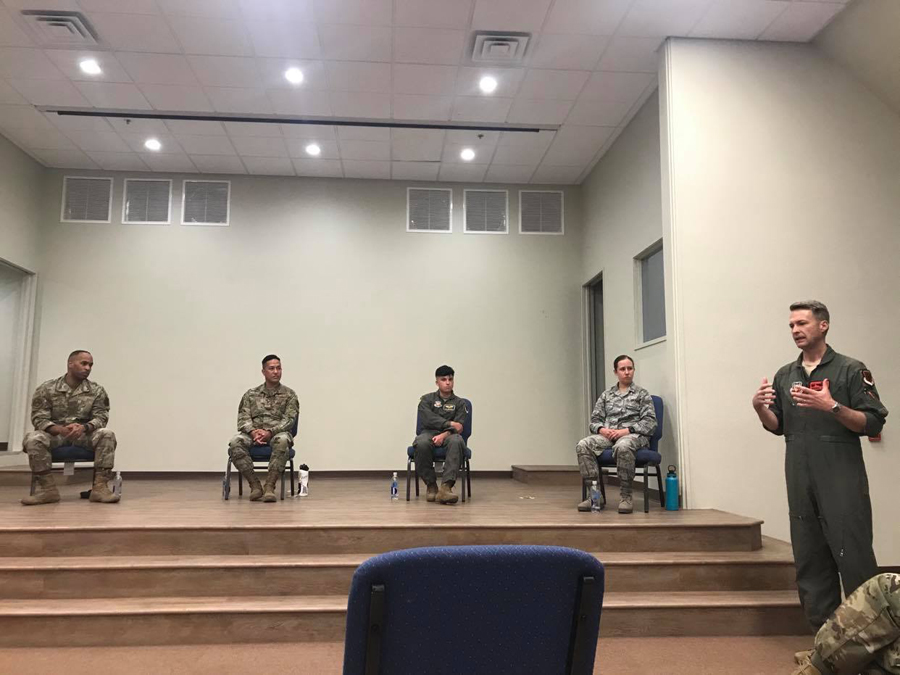 “Every day is pride,” he said. “I don’t just take pride in my sexuality, I take pride in who I have become, how far I made it, and against all odds I’m still here making people proud.† Enlisting under ‘don’t ask, don’t tell’ (DADT) was a struggle because having to turn a part of you off all day long is hard. Then to have to prove yourself every day for every new commander, rater, supervisor, permanent change of station (PCS), temporary duty (TDY), or office you can get worn out.”

Paris said he was raised with morals, values, as well as pride, and that proving himself every day is second nature.

“When people first meet me they make an instant judgement: how I wear my hair, my mannerisms, my voice,” Paris said. “Then my drive takes over and I accept the challenge to let them know who I am, how I work, the person I have become.”

All that being said, Paris has still had leaders and seen progress within the Air Force to inspire hope for generations to come.

“Being at the 432nd Wing has been a great tour thus far.† I believe in the Wing leadership, which makes me work harder,” he said. “This is Creech’s second Annual Pride event. I’m glad we are here, talking about experiences, and to be honest I’m excited to see what is next.

“Being under DADT, fast forwarding to now is progress in my opinion,” Paris continued.” It may not be much to some but if you told me when I first enlisted that I would be sitting on a panel talking about being part of the LGBTQ+ community I would’ve said there’s no way.”

There were members of the audience who agreed with the sentiments Paris had to share, one Airman saying his military family is where he feels most like himself.

Other Airmen in attendance felt open enough to also share their stories of acceptance, rejection, and experiences in-between.

Conversations of the day now ended, it’s vital for Airmen of every walk of life to be open to perspectives and experiences they do not share with their wingmen. Only from listening, learning, and leading for one another will the Air Force continue to grow.