The goal of the WIC is to train students in air, space, and cyber weapons superiority, as well as tactical combat in support of the joint force.

Loglisci’s training consisted of more than 400 hours of graduate-level academics and more than 60 training events, both live-fly and in the simulators, and is considered be one of the most challenging courses an operator can experience in their career.

“This achievement meant the world to me,” said Loglisci. “I’ve been fortunate to be surrounded by some outstanding fighter pilots in my time here, both as enlisted and as an officer. As a pilot, I was able to see new Weapons Officers come to the 119th Fighter Squadron from Active Duty and see the effect that one or two people can have on changing the culture of a unit. I knew very early on in my Air Force career that I wanted to be an F-16 Weapons Officer so to see it come to fruition almost 15 years later was pretty surreal.”

The course concluded with the Advanced Integration phase in which all aspects of the course were assessed. This included the ability to lead and instruct teams in weapons operations in land, air, space, and cyber domains. 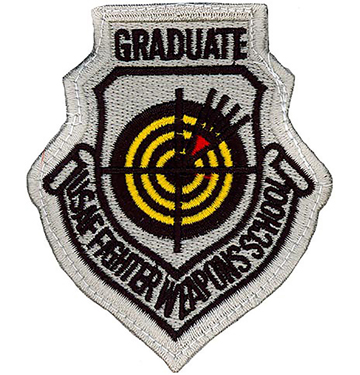 “Daily training requirements, funding, and real-world missions typically mean that fighter squadrons fight and train amongst themselves and rarely integrate with other aircraft and platforms,” said Loglisci. “This makes you very good in your own weapons system but not very good at understanding the big picture and where the F-16 fits into the fight. Weapons School is all about integrating with other MDS (aircraft) and forming a plan based on the variety of capabilities that each platform brings to the fight. Understanding other platforms and their capabilities allows mission commanders to solve complex problems that each individual weapons system could never do by itself….and win.”

Loglisci’s return from USAFWS will solidify him as the first weapons officer to come from the 177th Fighter Wing since 2012 and the fourth weapons officer at the Wing currently. Weapons Officers serve as chief instructor pilots for their wings as well as advisors to military and government leaders at all levels.

“I struggled with being away from family for such a long time,” lamented Loglisci. “We had pre-deployment training for the last AEF starting in March followed by the AEF that lasted until August. Two months later I, found out that I was accepted to WIC and began spin-up training which consisted of three separate TDY’s from October to December. I then left for WIC in December and returned in June. That meant I was gone and away from my family for 14 out of the last 18 months. My wife is a rock star and literally handled everything while I was away. I wouldn’t have been able to do any of this without her.”

Graduates earn the right to wear the Weapons School patch for the rest of their careers and this right has earned Weapons Officers nicknames such as “patches” or “target arms.”

The unit’s newest “patch” will certainly be a leader, problem-solver and inspiration for Airmen of the 119th FS and 177th FW, for many years to come.