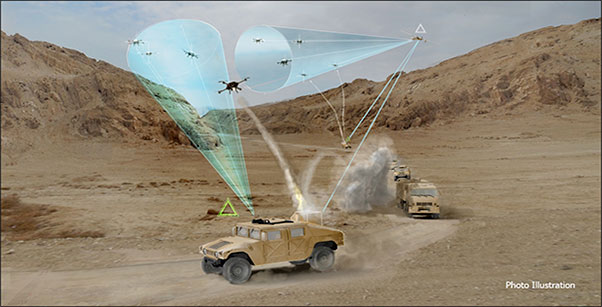 DARPA’s Mobile Force Protection program seeks to develop an integrated system capable of defeating self-guided sUAS (i.e., those that do not rely on a radio or GPS receiver for their operation) attacking a high-value convoy on the move, and recently awarded Phase 1 agreements to start research.

To accelerate the program’s pursuit of potentially revolutionary benefits, the Agency has also issued a Request for Information (RFI) to identify promising sUAS-sensing and -neutralization technologies that could augment or complement the MFP systems currently under development.

MFP seeks scalable, modular, and affordable approaches with small footprints in terms of size, weight, power, and number of people needed for operation. With this RFI, DARPA is not looking for end-to-end systems, but rather innovative technology components that could be combined with the MFP systems integrators’ fielded concepts. DARPA will review responses to assess technology and system relevance, potential performance capability, and technology maturity. To be considered, technologies must be sufficiently mature to perform a field demonstration planned for January 2018.

“Keeping warfighters safe from small unmanned air systems requires knowing that one or more is coming and removing their potential as a threat while they’re still at a safe distance,” said Jean-Charles Ledé, a program manager in DARPA’s Tactical Technology Office (TTO). “This RFI aims to help DARPA stay abreast of the latest technologies that could provide those capabilities, and integrate some of the most promising ones into an eventual MFP technology demonstration system.”

* Sensing: The ability to detect numerous sUAS at a distance of 1 km or greater, have a small footprint compatible with tactical ground vehicles such as the High Mobility Multipurpose Wheeled Vehicle (HMMWV or Humvee) and the U.S. Coast Guard’s Defender-class 25-foot boat, and support highly automated operations.

* Neutralization: The ability to disable or destroy numerous self-guided sUAS at a distance of 1 km or greater, while ensuring low collateral damage and low cost per engagement.
The RFI invites short white papers (no more than three pages plus a cover sheet) describing the respondent’s technology. All responses and queries about the RFI must be emailed to DARPA-SN-17-77@darpa.mil. Responses will be accepted until 4:00 PM Eastern on Monday, October 2, 2017. Early responses are encouraged. Responses are welcome from all capable sources including, but not limited to, private or public companies, individuals, universities, university-affiliated research centers, not-for-profit research institutions, foreign entities, and U.S. Government-sponsored labs.

Based on the white papers, DARPA may select up to approximately twenty (20) submissions total in the areas of sensing and/or neutralization to attend a one-day MFP Technology Day scheduled for Wednesday, November 8, 2017, at DARPA’s offices in Arlington, Va. The purpose of the workshop is to encourage teaming and expose MFP performers to novel technologies they could potentially include in their research.

In addition to the Services, DARPA is working closely on MFP with the Department of Homeland Security’s Science & Technology Directorate and the U.S. Coast Guard.