Lockheed Martin is celebrating 60 years of the U-2 program with festivities planned throughout the company.

“It’s not a 60-year old aircraft, it is a 60-year old program that is still going strong,” said Melani Austin, U-2 program director at Skunk Works, Palmdale, Calif., during a recent press tour. “We have people that have started working on this program while they were in the Air Force and continued on with Lockheed. They believe in the mission and are still passionate about her.”

Also known as the Dragon Lady, the U-2 reconnaissance aircraft was designed by Clarence L. “Kelly” Johnson, creator of Lockheed’s secret “Skunk Works” research and development division and legendary designer of aircraft in 1955. Originally planned for the Air Force but deemed to “risky,” the spy plane was produced in only nine months after conception for the CIA and — under budget.

“There really is nothing like her,” said Greg “Couch” Nelson, Lockheed Martin U-2 Test Pilot who served 21 years in the Air Force, 17 of them on the U-2 program flying in all major theaters and other missions including Africa and Korea. He has been with Lockheed Martin for five years. “If something is stirring around the globe, you can rest assured there is a U-2 overhead.”

Satellites replaced the SR-71 however Nelson feels nothing to date can replace the U-2.

“Global Hawk was made to compliment the U-2. It has its purpose but when it comes to reconnaissance and relaying communication, nothing beats the U-2. It doesn’t simply make a pass, she can hang out all day documenting what is going on and relay that in real time.” Nelson said the U-2 can get to a target faster than Global Hawk and can change mission requirements much, much faster.

Always looking ahead, monitoring the global environment and anticipating what the military may need, Austin says Lockheed Martin engineers are constantly brainstorming.

Currently they are designing a next-generation high-altitude, long-endurance (HALE) surveillance airplane, known as the RQ-X or UQ-2. 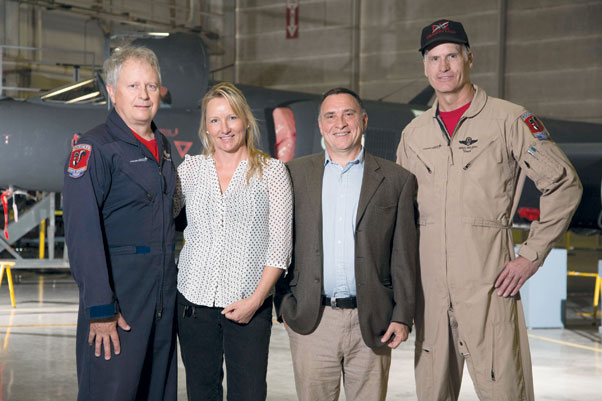 Lockheed Martin U-2 Test Pilots Rob “Skid” Row and Greg “Couch” Nelson, pose in front of a U-2 undergoing upgrades along with photojournalist Linda KC Reynolds and Aviation Week senior editor Guy Norris. Pilots must wear special spacesuits while flying and eat their chicken dinners and chocolate pudding through a straw, often with added caffeine for long missions.

The Air Force’s latest budget plan retires the U-2 in 2019, however fatigue tests show that the aircraft is structurally fit to fly through 2045.

Payloads can be changed quickly depending on mission requirements.

“It’s like having a real good wi-fi in your house,” said Lockheed Martin U-2 Test Pilot Rob “Skid” Row who has more than 5,000 hours in the aircraft. “The basics are already there so if you need a new printer, computer or smart TV you just plug it in and it automatically connects. That is pretty much how quickly the U-2 can configure.”

Scott Winstead, Lockheed Martin U-2 strategic development manager said that the U-2 is also valuable for political messaging. When the United Nations was surveilling for weapons of mass destruction, the U-2 was also monitoring the area.

“They invited us over to investigate but threatened to shoot down a U-2 if we would not quit surveillance,” explained Winstead. President Clinton said to stay in the area and if fired upon, the Navy was nearby and ready to respond immediately.

Today, China is dredging dirt and building a runway in the South China Sea that is large enough for heavy military transport and fighters. “We want them to know we are watching them,” says Winstead.