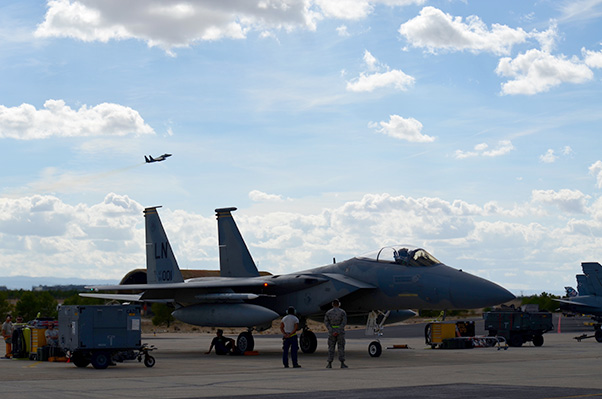 Fighter pilots from seven allied countries, including the U.S., U.K., Spain, Czech Republic, Greece, Poland, and Italy completed the NATO Tactical Leadership Program in Albacete, Spain, Oct. 9.
Six F-15C Eagles and more than 100 personnel from the 48th Fighter Wing at Royal Air Force Lakenheath, England, contributed to the program.
“I think it’s important for our graduates to be well versed in the capabilities of NATO partners,” said Lt. Col. John Stratton, the 493rd Fighter Squadron commander. “For us to remain ‘Forward, Ready, Now,’ it requires the entire team to be efficient in deploying, executing the mission and redeploying to any location at any time.”
Throughout the program, NATO and allied pilots prepared to become mission commanders by leading coalition strike packages, instructing allied flying as well as nonflying personnel in matters related to tactical air operations.
“We have tactics, techniques and procedures that NATO stipulates, and this program is how we put those into practice,” said RAF Flight Lt. Nick Critchell. 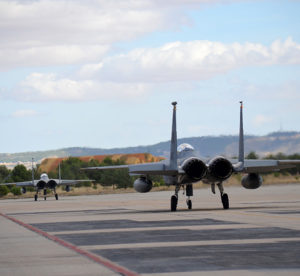 Crew members of the 48th Fight Wing prepare an F-15C Eagle for takeoff at the NATO Tactical Leadership Program in Albacete, Spain, Oct. 8, 2015. The program is a NATO mission commander’s school designed to provide multilateral training and increase interoperability amongst allied partners.

From the pilots operating in the air to crews keeping things running on the ground, the Airmen from participating countries worked together at all levels.
“The working relationships have been excellent,” said SrA. Dylan Wheeler, a 748th Aircraft Maintenance Squadron crew chief. “It feels like we have similar goals, and everyone works well together.”
Switzerland, France and Belgium also contributed personnel to the program with instructor pilots, search and rescue assets, and aerial reconnaissance experts.
“This program is a validation of baseline procedures and is a testament that we can turn up and perform from the same sheet of music,” Critchell said.