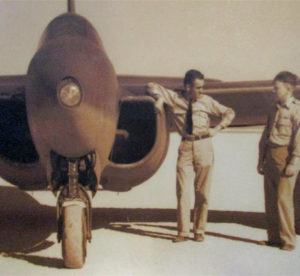 The P-59 at Edwards Air Force Base, Calif.

My, how times have changed when it comes to moving experimental aircraft around the country.
Back in September 1942 getting the Bell Model 27 from Buffalo to Muroc Dry Lake was not just a simple move of an aircraft but a six-day adventure that the few that were involved with would never forget!
Ted Rogers was a member of the GE field Team and, along with Frank Burnham, was selected to accompany the engines and supervise their installation in the P-59 when they all arrived at North Base Muroc.
The first flight of the P-59 was not going to be in the air but on two flats cars as the railroad was the number one method of transport at the time.
Midnight, Sept. 12, 1942, at the yards of Niagara Power Company in Buffalo, N.Y. Air Force guards patrolled the deserted area while a huge overhead crane lifted its precious cargo and set it down gently on the railroad cars. Hidden in crates the top secret aircraft was ready for a cross-country trip. But we had a problem, it was the fear of the unknown with a new technology jet engine. How would it fare during a six-day trip on rails across America?
Concerned about the bearings, it was decided that if those engines could spin while in transit the oil would keep the bearing in top notch shape! So a crew was put together to maintain and operate the system that would keep those engines turning for six days.
The answer to keep those engines turning was a gasoline powered air compressor set on blocks on the rear half of the flat car that contained the fuselage. Unwinding a coil of copper tubing it was connected to the interior of the crate. While this was going on the yard crews of the railroad were dealing with the unspoken question — what could possibly be in that crate that needs compressed air? Some new explosive or a compressed air driven plane? Little did they know how close they were in the description of the cargo!
Ted describes the moment when it all came together and the set up was tested for the first time.
“With a show of self-confidence, we filled the gasoline tank, checked the engines for freeness and started the compressor. We opened the valve feeding the air jets to the turbines and the engines rolled! Climbing into the cockpit, I checked the engine speed at 400 rpm and observed that oil was flowing protectively to the bearings. The two flat cars and a combination mail and passenger car for our home en route were coupled together, and with both engines purring we were off, coupled to the Red Ball California-bound fast freight!” 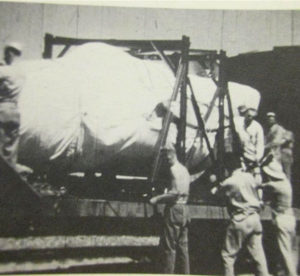 The housings that held the GE 1A series engines that the compressor fed air to for the cross-country journey.

The journey was a whole story in its-self with defective rolling railroad equipment, Marines that felt the band of aircraft folks had taken over their accommodations, riding in a car with six 55-gallon drums of gasoline for the compressor, a sterno stove in the same car to cook their meals and all the necessities to keep three “travelers” happy.
The problem, we had 10 men now assigned to the crew! Jumping off at train stops to grab a quick bite was always an adventure with our wayward travelers running to jump on the train as it pulled out and sometimes missing the train and catching the next train to catch up with their precious cargo!
After scares when the compressor would stop, filling the gas tank on a flat car of a fast moving freight on a curve was always a hair-raising event to say the least! But they would persevere! I will let Mr. Rogers wind up his adventure with his recollection of the end of this amazing journey.
“Early morning found us traveling across an unbroken vista of plain nothing, broken only by an occasional Joshua tree. Then Muroc! Off in the distance we could see the reflective sheen of a huge lake. The brakemen dispelled our impression. There was no lake; it was a mirage. Moving to a siding, we cut the air compressor after six straight days of running. We were saddle sore and filthy as we climbed down from the first coast-to-coast ‘flight’ of a jet airplane.”
I’m sure they did not get a medal but to Ted Rogers, Frank Burnham, Angus McEachern, Lieutenant Woodford a sergeant and two privates from Wright Field a “job well done” and I hope their next trip back then on a train was more about relaxation then keeping a top secret airplane happy with a steady diet of air !

Till next time Blue skies, Bob out …