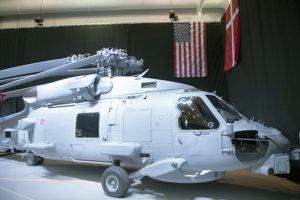 The U.S. Navy accepted the first MH-60R helicopter slated for Denmark from Lockheed Martin in a ceremony Oct. 22 at the Lockheed Martin facility in Owego, N.Y.
“We are excited to accept this aircraft bound for Denmark,” said Rear Adm. CJ Jaynes, program executive officer for air anti-submarine warfare, assault and special mission programs, which oversees the U.S. Navy’s H-60 program office. “The Romeo is the U.S. Navy’s primary rotary anti-submarine and anti-surface warfare platform in operation and we’re proud to know these will be flying soon with the Royal Danish Air Force — our first Seahawks in Europe.”
Manufactured by Sikorsky Aircraft and provided with advanced mission systems and sensors by Lockheed Martin, the MH-60R is operational and deployed as the primary U.S. Navy anti-submarine and anti-surface warfare system for both open-ocean and littoral zones. In 2012, Denmark announced it will acquire a total of nine MH-60R aircraft by 2018 to conduct missions such as surveillance, search and rescue, anti-piracy and anti-surface warfare.
“MH-60R helicopters host the complete package of sensors and systems that address today’s increasing threats,” said Dan Spoor, Lockheed Martin vice president of Aviation and Unmanned Systems. “We are honored to extend our international partnership with the Royal Danish Air Force to deliver these capabilities and the technology that will protect our allies around the globe.”
Prior to being delivered to the Royal Danish Air Force, these aircraft will enter a series of testing to validate Danish configuration modifications. The first aircraft will be delivered to Denmark in the second quarter of 2016, and the full fleet will be delivered by 2018.
Denmark is the second international partner in the MH-60R program, following the Royal Australian Navy. To date, Lockheed Martin has delivered a total of 14 of 24 Australian aircraft ahead of schedule. The remaining 10 aircraft will be delivered in 2016.