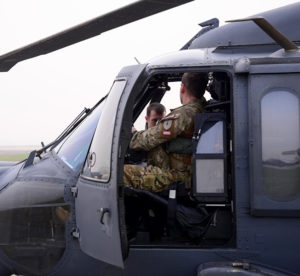 Members of the 33rd Rescue Squadron prepare for takeoff inside their HH-60G Pave Hawk Oct. 16, 2015, at Osan Air Base, South Korea. The 33rd RQS members are from Kadena Air Base, Japan, and are participating in exercise Pacific Thunder 15-02.

A bilateral exercise involving combat search and rescue drills ended Oct. 23 after nearly two weeks of constant training between U.S. and South Korean forces.
Exercise Pacific Thunder 15-02 brought together units from the Air Force, Marines and South Korean air force to practice air combat and CSAR by focusing on enhancing interoperability and combat readiness of the military alliance across the Korean Peninsula.
“This exercise helps us bring together assets who would be involved and integrated into a real world CSAR mission,” said Capt. Jerrod Dillon, the 25th Fighter Squadron flight safety officer. “It also gives U.S. forces a chance to integrate and execute with our ROKAF (Republic of Korea Air Force) counterparts, further building the combined force proficiency and readiness, while simultaneously improving relations between our two militaries.” 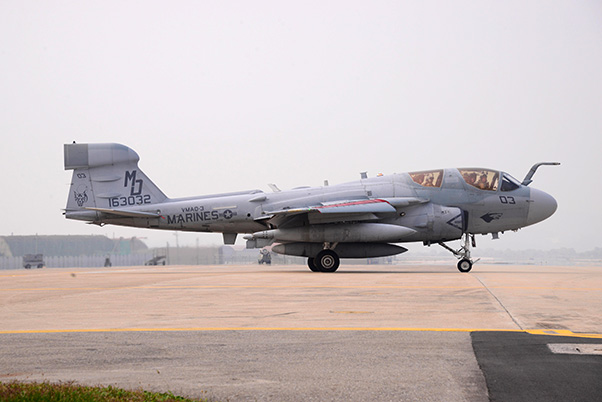 An EA-6B Prowler assigned to Marine Tactical Electronic Warfare Squadron 4 taxis toward the runway Oct. 16, 2015, at Osan Air Base, South Korea. The Marines participated in exercise Pacific Thunder 15-02. More than 10 different organizations and squadrons came together to participate in the two-week exercise.

Pacific Thunder is a total-process exercise, encompassing nearly all aspects of communication, coordination, command and control, mission planning, and execution.
“By taking a look at current tactics and procedures, practicing and refining those, and then exercising the system as realistically as possible we are able to provide a world-class training opportunity to everyone involved,” Dillon said. “We are getting realistic training that’s in line with how we would fight.”
More than 10 different organizations and squadrons came together to participate in the most recent exercise.
“In size and scope, it’s rapidly approaching large-force-exercise levels, but I think it’s unique in that it’s primarily planned and executed on a squadron or tactical level,” Dillon said. “What we do locally during these missions directly impacts the big Air Force mission. The knowledge and experience gained while participating in this exercise is spread throughout the rest of the Air Force as people move on from Korea, carrying that knowledge with them.”
Working closely with all players on a bi-annual basis builds individual proficiency and increases the total-force capability of all participants, he added.
“I’m excited to be a part of this exercise, especially since we are working closely with the (South) Korean air force,” said SrA. Jacob Ricker, a 718th Aircraft Maintenance Squadron crew chief from Kadena Air Base, Japan.
Pacific Thunder highlights the longstanding military partnership, commitment and enduring friendship between the two nations. It helps ensure peace and security on the Korean Peninsula and reaffirm the U.S. commitment to stability in the Indo-Asia-Pacific region.
“It’s all about the CSAR,” Dillon said. “Aircraft can be replaced but it’s much harder to replace the pilot who could have many years of training and experience. This exercise ensures we are ready to do the CSAR mission whenever called upon.”