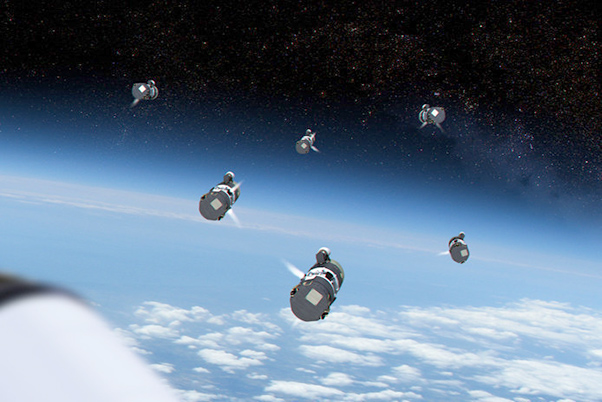 Raytheon is developing a Multi-Object Kill Vehicle that will simultaneously defeat a number of ballistic missile threats in space. The company’s cutting-edge approach represents the next generation of technology in kill vehicles.

Raytheon has completed the first Program Planning Review with the U.S. Missile Defense Agency on the future Multi-Object Kill Vehicle concept, a key step toward defining critical aspects of its design.
The milestone is a critical part of the Concept Development Phase. It’s designed to ensure Raytheon is aligned with the MDA’s expectations and on track for a Concept Review in December.
“Emerging threats demand a new engagement paradigm — one the Raytheon team is able to fully support with our depth of experience and breadth of capability,” said Dr. Thomas Bussing, vice president of Advanced Missile Systems. “We’re leveraging decades of experience across four kill vehicle programs and vast tactical weapon expertise across every domain and mission area to meet this critical need.”
As part of the $9,775,608 contract awarded in August 2015, Raytheon will define an operational MOKV concept. The MOKV will destroy several objects by utilizing advanced sensor, divert and attitude control and communication technologies.
Design work on Raytheon’s MOKV concept is occurring in the Advanced Missile System’s product line, an industry-leading technology and innovation hub. Current Raytheon-built kill vehicles are built in the world-class, one-of-a-kind Space Factory, which has been called a national asset. Between the Standard Missile-3 and Exoatmospheric Kill Vehicle programs, Raytheon has achieved more than 30 intercepts in space – far more than any other company.