Once Susan Zerbe learned that a CH-47 Chinook helicopter had been shot down in Afghanistan, killing all 30 U.S. troops on board, she knew her son was one of them.
“I heard it on the news that morning and I just knew he was on there,” she said of her son, TSgt. Daniel Lee Zerbe.
Hours later, her premonition came true when military officers knocked on the door to inform her that Daniel was on that helicopter, as he and others traveled to help Army Rangers in a fierce battle against insurgents.
“It was a horrible feeling,” she recalled of the Aug. 6, 2011, incident. “Your heart just sinks.”
Zerbe and her family laid a wreath on Daniel’s headstone Dec. 12 during Wreaths Across America Day at Arlington National Cemetery.
The event drew roughly 50,000 family members of fallen troops and volunteers who placed more than 240,000 wreaths on the white marble headstones that line the cemetery to symbolize their respect for those who gave all.
“All of these people don’t get to come home for Christmas,” Zerbe said. “It’s our way to honor and remember what they did for all of us.”
But the wreaths, which were also placed at more than 1,000 locations across the country, were not just for decoration.
“We’re not here to decorate graves,” Karen Worcester, co-founder of the nonprofit Wreaths Across America, told a crowd at Arlington. “We’re here so you can … remember not their deaths but their lives.” 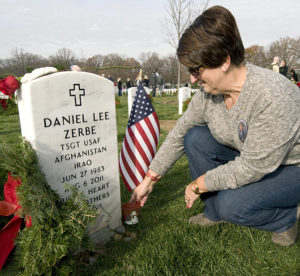 Susan Zerbe prepares to place a wreath on the headstone for her son, Tech. Sgt. Daniel Lee Zerbe, who was one of 30 U.S. troops killed when a CH-47 Chinook helicopter was shot down in Afghanistan in 2011. Susan and other family members of fallen troops as well as thousands of volunteers were at the Arlington National Cemetery, Va., on Dec. 12, 2015, for Wreaths Across America Day, an event to honor veterans during the holidays.

Memories
Emily Johnson traveled from Wisconsin to rekindle memories of her older brother, Army 1st Lt. David Andrew Johnson, who was killed by an improvised explosive device while on a dismounted patrol in Afghanistan in 2012.
“I wanted to spend the holidays with my brother,” she said. “It was always a really special time for him.”
Emily, 20, sat on a blanket in front of David’s headstone as she reminisced about her 24-year-old brother and his “goofy smile.”
“I don’t get to see him that often so I’ll probably be here all day,” she said. “I wish he was at home but at the same time it’s a big honor for him to be here.”
Nearby, Bob and Pat O’Kane-Trombley recalled memories of their son, Capt. Thomas Gramith, an F-15E Strike Eagle weapons systems officer who died along with the pilot when their aircraft crashed in Afghanistan.
They said he was “everybody’s big brother” who had a selfless, humble attitude that even earned him a humanitarian of the year award at Seymour Air Force Base, N.C.
“He really did a lot of community service that others noted, but he never talked about it,” Bob said.
The loss of Thomas in 2009 hit the family hard, they said, especially since the 27-year-old airman had 9-month-old twin daughters at the time.
“We got the knock on the front door and the minute I looked out of a small window on the door, I could see the gleaming silver cross,” Pat said of the insignia of the chaplain who would tell them the tragic news.
“That was the day when everything came crashing down,” Bob added.
Thomas and his pilot, Capt. Mark R. McDowell, 26, were only two young men of countless others who died defending the country. None of them should ever be forgotten, Bob said.
“If we fail to remember them,” he said, “we will lose everything we have.” 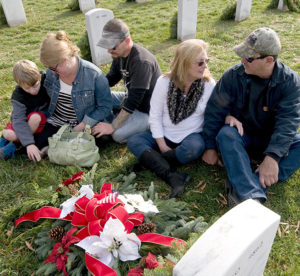 Family members of Army Sgt. 1st Class Johnathan McCain, who was killed in Afghanistan in 2011, spend time at his headstone at Arlington National Cemetery, Va., on Dec. 12, 2015. Families of fallen troops and thousands of volunteers were at the cemetery for Wreaths Across America Day, an event to honor veterans during the holidays.

Fundraising
To honor the fallen, fundraising efforts amassed about 910,000 wreaths that were placed on headstones across the country on Dec. 12. One of the largest fundraising groups was the Civil Air Patrol, which helped bring in about one-third of the wreaths.
“They solicited wreath donations for over 1,000 sites,” CAP Col. Dan Leclair, a retired Air Force master sergeant, said of the thousands of volunteers from the Air Force civilian auxiliary. “We’re very privileged to do this.”
The annual event started in 1992 with 5,000 wreaths. For the first time last year, volunteers had enough wreaths for every headstone at Arlington.
“We did this and then the American people with their American spirit got under us and lifted us up,” Worcester said.
But placing wreaths was just one mission that volunteers were asked to do when recognizing those buried in Arlington.
“Please read the name out loud,” Worcester said of the headstones. “Because we do die twice: when we stop breathing and the last time when a human being mentions our name out loud.”