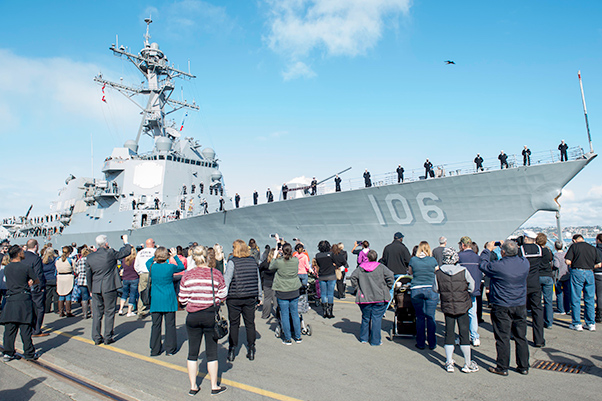 Navy photograph by PO2 Will Gaskill

The Arleigh Burke-class guided-missile destroyer USS Stockdale (DDG 106), departs Naval Base San Diego as part of the Great Green Fleet, for a scheduled deployment. The Great Green Fleet is an initiative optimizing energy use to increase optimal range, endurance and payload, turning energy into a force multiplier.

The U.S. Navy Jan. 20 launched its first carrier strike group powered partly by biofuel — a mix made from beef fat — calling it a milestone toward easing the military’s reliance on foreign oil.
The maritime branch touted the warships as the centerpiece of its “Great Green Fleet” — part of a Navy-wide initiative that aims to draw 50 percent of its power from alternative energy in four years.
For now, the mix fueling the ships is only 10 percent biofuels and 90 percent petroleum. The Navy originally aimed for a 50-50 ratio, but the cost was too high, though that could change as competition grows in the alternative fuel industry, Navy Secretary Ray Mabus told The Associated Press.
Mabus and Agriculture Secretary Tom Vilsack inspected the carrier group’s ships Wednesday off San Diego, where the nuclear-powered aircraft carrier the USS John C. Stennis and the guided-missile destroyer USS Stockdale were preparing for a seven-month deployment. The Stockdale and four other ships are the first to begin operating regularly with a blend of biofuels and petroleum.
“It gives us a strategic advantage,” Mabus said of the Navy weaning off fossil fuel. Turning to alternative energy will give the military options so it is no longer at the mercy of fluctuating oil prices and oil-producing nations that may not have U.S. interests in mind, he said.
Vilsack called the Navy’s “Green Fleet” a “tremendous opportunity” for the biofuel industry that will benefit farmers and create thousands of jobs.
The officials boarded a helicopter to watch the USS William P. Lawrence replenish its tanks with the blend of biofuel, which is made from beef fat from Midwestern feedstock and produced by California-based AltAir Fuels. 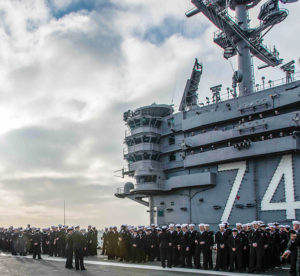 Sailors prepare to man the rails on USS John C. Stennis’ (CVN 74) flight deck prior to pulling away from San Diego for a regularly scheduled deployment. Providing a combat-ready force to protect collective maritime interests, Stennis as part of the great green fleet is operating in the U.S. 3rd Fleet area of operations on a Western Pacific deployment.

Critics, including environmentalists, say biofuel production is too costly and on a large scale may do more harm than good if it requires the a lot of farmland, fertilizer and fuel to produce.
Mabus contends no land for food production will be used for the biofuels.
The Defense Department is the world’s largest consumer of energy, and the Navy uses more than a third of that, but Mabus said going green is not just about reducing the Navy’s carbon footprint.
“In 2010, we were losing too many Marines in convoys carrying fossil fuels to outposts in Afghanistan, and the prohibitive cost of oil was requiring us to stop training at home in order to keep steaming abroad, a dangerous and unsustainable scenario,” he said in a statement.
All military branches are looking to cut their ties to foreign oil as part of a national security strategy. The federal government has invested more than $500 million into drop-in biofuels, which can be used without reconfiguring engines.
All ships and aircraft in the Navy have been certified to use biofuels. The fleet also includes nuclear vessels and hybrid electric ships.
The Navy bought 77 million gallons of the 10 percent biofuel mix at $2.05 a gallon to fuel its ships off the West Coast this year. Similar contracts are in the works to fuel ships elsewhere.
The purchase comes after a 2012 demonstration on the Navy’s use of alternative fuels drew fire from lawmakers outraged at the $26-per-gallon price tag. Legislators passed a law prohibiting the Pentagon from buying biofuels in mass unless the price is competitive with that of petroleum.
Retired Navy Capt. Todd “Ike” Keifer, who has published a study on the Navy’s plan, said adding 10 percent biofuels into the mix will not help the environment. He said he does not believe the Navy will ever get “any meaningful quantities of cost-competitive biofuels.”
Mabus said the technology is evolving quickly and, in the future, biofuel made from landfill waste, wood chips and even food waste may usher in lower prices for a blend with a higher content of biofuels.
“That’s going to continue to expand as the biofuel industry ramps up,” he said.