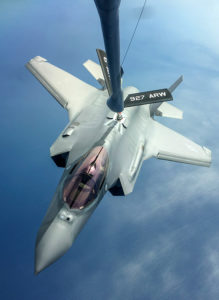 An Eglin Air Force Base, Fla., F-35A Lightning II receives fuel from a KC-135 Stratotanker assigned to MacDill AFB, Fla., approximately 100 miles off the Gulf Coast March 2, following the 58th Fighter Squadron’s first successful munition employment at a nearby range. Airmen from the 33rd Fighter Wing were able to complete modifications to the aircraft ahead of schedule to enable the use of inert munitions instead of simulated weapons, advancing the fifth-generation fighter’s syllabus and ensuring pilots receive the most comprehensive training before they support a combat-coded F-35A unit.

The training mission was the first time the Florida-based fifth-generation fighters used actual munitions instead of simulated weapons. The mission follows on the heels of the recent employment of weapons by combat-coded F-35A aircraft from the 388th Fighter Wing at the Utah Test and Training Range last week.

“Things are moving swiftly for all aspects of the F-35 program at this point,” said Burgoon. “This mission verified a critical component of our syllabus. Being able to employ weapons within our training units ensures we can provide our student pilots the most comprehensive training available before they go out to support a combat-coded F-35A unit.”

The 33rd FW aircraft required a series of physical and software modifications to enable weapon employment as the majority of aircraft here were produced during earlier production phases. The weapons drop was originally scheduled for late spring of this year, but innovation and persistence from 33rd FW pilots and maintainers allowed for an earlier launch of the munitions.

“We’re reaching the end of our development phase,” said Lt. Col. Scott Gunn, 58th FS director of operations, in reference to the U.S. Air Force’s IOC goal in late 2016. “As the F-35[A] program gains further momentum we need to be ready to provide combat-capable students. Dropping bombs is part of that combat requirement.”

For Gunn, a former F-15C Eagle pilot, the occasion was a significant shift in the squadron’s training capability and also marked a new personal milestone as a fighter pilot.

“I come from an air-to-air background, so dropping a munition was a new experience for me,” said Gunn. “Being able to hit the pickle button, feel the ‘ker-klunk’ of that 500-pound bomb leave the [internal] weapon bay, and track it all the way down to the target was a huge rush.”

The F-35A program currently requires pilots to have experience in tactical fighter aircraft, to include the F-15, F-16 Fighting Falcon, A-10 Thunderbolt II and F-22 Raptor. Their training primarily centers on the use of virtual Full Mission Simulators as there are no two-seat training models of the F-35A.

“The FMS and use of simulated weapons during flight are valuable training tools for our students, but nothing familiarizes students better with the experience of dropping munitions than actually dropping munitions,” said Burgoon. “The first time they do drop a bomb from this plane cannot be in a combat situation.”