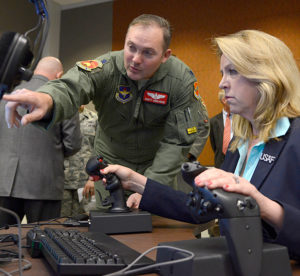 During her first visit to the base, James held an all call where she took time to thank Airmen and give her impressions of Luke AFB, Ariz.

“Wow, what a great total force story we have going on here,” James said. “We have active duty, the Reserve component, civilians, and fantastic contractor support working side by side with our international partners. That is the broadest of the broad total force story, and I’m impressed with it.”

Most of James’ day involved briefings about F-35 operations and touring F-35 facilities.

James spoke about how impressed she was with the leadership team with respect to F-16 Fighting Falcon and F-35 training, as well as her tour of different parts of base and interacting with Airmen in their work centers.

“When it comes to the F-35 program, this is a program that has really taken off,” James said. “Pilots and maintainers are being trained, sorties are being flown and challenges are being overcome. There is a ‘can-do’ spirit here.”

The secretary’s visit included stops to the Academic Training Center, a state-of-the-art training center for fighter pilots, and the 61st Fighter Squadron and 61st Aircraft Maintenance Unit, the first squadrons to fly and maintain the F-35 at the base.

During her tour, James discussed everything from flight equipment; the performance of ALIS, the F-35’s autonomic logistics information system; the next generation F-35 helmet; and Luke’s partnerships with other nations training here.

James voiced how impressed she was of the support she has seen for the 56th Fighter Wing’s mission to train some of the best F-35 and F-16 fighter pilots, from Arizona leaders such as Gov. Doug Ducey and community groups like Luke West Valley Partnership.

She also remarked how the work Luke Airmen are doing to accomplish that mission will give America aerial victory in the future.

“I’m truly blown away by all you are accomplishing here,” James said. “You truly are making the future of our Air Force happen here today. The crucial training capabilities that you are providing will allow the United States to prevail in any kind of fight, particularly that high-end type of the fight: the anti-access, area-denial hard fight.”

During her speech, James made points on global security, a smaller Air Force, the need to modernize the force and increase overall readiness, as well as discussing her priorities for the service.

James fielded a few questions from the audience before departing, but not before giving Luke AFB one last thank you.

“Team Luke, you are doing a fantastic job,” she said. “These are critical capabilities for today, as well as for the future of our Air Force, and you are going to make it happen for us all.”