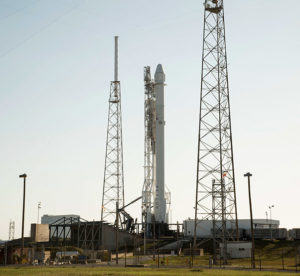 A Falcon 9 rocket with a Dragon spacecraft stand at Space Launch Complex 40 at Cape Canaveral Air Force Station before the CRS-8 mission to deliver experiments and supplies to the International Space Station.

The launch of a SpaceX Dragon cargo spacecraft to the International Space Station on April 8 will set the stage for an historic rendezvous in orbit.

Although the SpaceX and Orbital ATK spacecraft have made 12 launches between them, this will be the first time that the two vehicles, contracted by NASA and developed by private industry to resupply the station, are connected to the space station at the same time. Orbital ATK’s Cygnus, which launched to the station March 22, is already attached to the station’s Unity Module. Dragon will take the port right next to it on the Earth facing side of the Harmony module. SpaceX made its first cargo resupply mission for NASA in 2012 and Orbital ATK followed with Cygnus the next year.

That vital role continues for this flight, which is the eighth cargo resupply mission for the Dragon. It will reach space on the power of a SpaceX Falcon 9 rocket lifting off Friday, April 8, from Space Launch Complex 40 at Cape Canaveral Air Force Station.

Inside the Dragon’s pressurized section is about 3,800 pounds of experiments and equipment needed by crew members to live in orbit during Expeditions 47 and 48.

With the arrival of Dragon, the space station will tie the record for most vehicles on station at one time – six – which hasn’t happened since 2011. Cygnus, two Soyuz and two Progress vehicles station are currently docked to the orbiting laboratory. 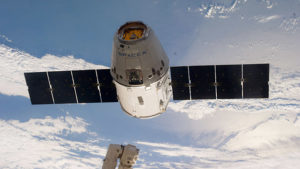 A SpaceX Dragon is seen as it approached the International Space Station during a May 2014 cargo resupply mission.

“When Dragon and Cygnus are docked next to each other on station for the first time, it will be a significant milestone for our partnerships with American companies to deliver cargo to the International Space Station,” said Kirk Shireman, NASA ISS Program manager. “Commercial resupply missions enable NASA, private industry and other government agencies to continue the extensive scientific research taking place aboard the space station.”

The research launching on Dragon includes a project by Eli Lilly coordinated through the Center for the Advancement of Science in Space, or CASIS, that will test an antibody on mice to see whether it stops muscle deterioration in microgravity as it has on Earth. The research could benefit both those on Earth who lose muscle strength as they age and astronauts in space where they lose muscle and bone density during long-term stays in orbit.

The science packed for transport to the station covers a range of areas including genetics and the use of crystals to develop new medicines to continued research on plants. Among the cargo are mall pouches holding seeds and nutrients to grow on the station into the latest plants in space, as researchers begin the third phase of growing vegetables in space in the experiment known as Veg-03.

One of the largest experiments loaded into Dragon will fly to space inside the unpressurized trunk section of the spacecraft. Compressed into a cylinder for launch, the Bigelow Expandable Activity Module will be mounted to a different port on the station where it will expand to a length of 13 feet with a 10.6-foot diameter width. 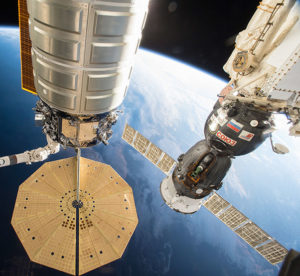 A Cygnus cargo spacecraft is seen from inside the International Space Station after being connected to a port on the orbiting laboratory. Next to the Cygnus is a Russian Soyuz spacecraft. The CRS-8 mission will see a SpaceX Dragon join the station for a first-time pairing of the two kinds of American commercial resupply spacecraft.

Known as BEAM, the 3,000-pound module does not have rigid, heavy side panels. Instead, it is made of thick material designed to safely hold air inside while being strong enough to resist micrometeorite damage. The flight is meant to determine whether the concept offers designers a way to build habitation modules or other structures in the future that expand after launch to create much larger spacecraft for deep-space missions, such as a journey to Mars.

A busy schedule in space means a busy processing flow on Earth.

At NASA’s Kennedy Space Center, where some of the hardware and science experiments are packed for the rigors of liftoff, teams are taking the increasing demands in stride as station equipment is readied for launch, and are preparing for this historic meeting of the two commercial spacecraft at the station.

“Most of our work for the space station are quick turnarounds to the station’s needs,” said Steve Bigos, project manager for Orbital Replacement Unit processing at Kennedy. “One of the most satisfying aspects of my job is that we have a 100 percent success record in meeting our delivery milestones.”