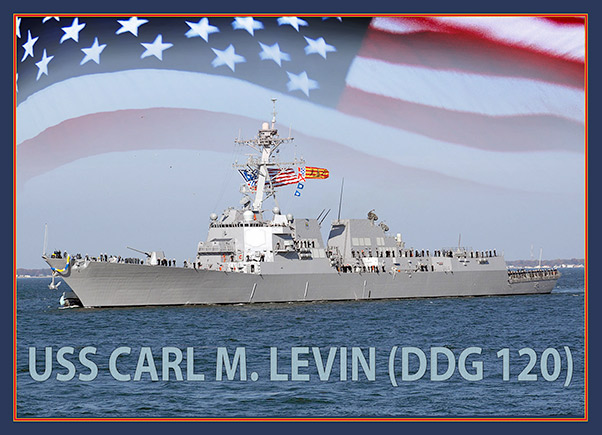 On April 11, during a ceremony in Detroit, Secretary of the Navy Ray Mabus announced the next Arleigh-Burke class destroyer, DDG 120, will be named Carl M. Levin in honor of the longest serving senator in Michigan history.

Currently, Levin is senior counsel at Honigman Miller Schwartz and Cohn LLP and chair of the Levin Center at Wayne State University Law School and the law school’s distinguished legislator in residence.

“It is a great honor to name this ship in recognition of such a dedicated public servant,” said Mabus. “I have no doubt that all who serve aboard her will carry on the legacy of service and commitment exemplified by Carl Levin during his storied career.”

“My family and I are deeply moved by this singular honor and to be so wonderfully connected to the men and women of our great Navy,” said Levin.
Arleigh-Burke class destroyers conduct a variety of operations from peacetime presence and crisis response to sea control and power projection. DDG 120 will be capable of fighting air, surface and subsurface battles simultaneously and will contain a combination of offensive and defensive weapon systems designed to support maritime warfare including integrated air and missile defense and vertical launch capabilities.

The ship will be constructed at Bath Iron Works in Maine and is expected to enter the Navy fleet in 2020. The ship will be 509 feet long, have a beam length of 59 feet and be capable of operating at speeds in excess of 30 knots.

Levin’s wife, Barbara, is the sponsor of littoral combat ship USS Detroit (LCS 7), which is expected to be commissioned later this summer along the Detroit River.