Planes, brains and automobiles where all part of the 5th Annual Mojave Experimental Fly-in event at the Mojave Air and Space Port, where pilots and flight enthusiasts gathered from around the country to display their aircraft, break world records and learn from other builders.

When Elio Motors was asked if they would like to come and display their three-wheeled, Elio, “not only did we say yes, but hell yes!” responded Pam Vassallo, Elio media relations. “What a perfect place to share innovation — these people get it!” Vassallo said the company is using old-school technology that has been tried and true. “We just packaged it differently.”

Elio is a two-seat commuter vehicle that can get up to 86 miles per gallon and starts under $7,000.

“Sometimes you just need a briefcase and a bag or passenger,” said Vassallo. The company expects to employ up to 1,500 people in Shreveport, La., and approximately 52,000 people have already signed up to own a car. Production is scheduled to begin in 2017.

Alongside the crowded flight line, not far from WhiteKnightTwo and other unique aircraft, Elliot Seguin, test pilot for Wasabi Air Racing and founder of the event, fired up his “Twerp” a turbojet-powered Quickee. With 85-pounds of thrust per engine, he said the souped-up aircraft is hard to legalize because no FAA Pilot has ever had this combination of aircraft and power. 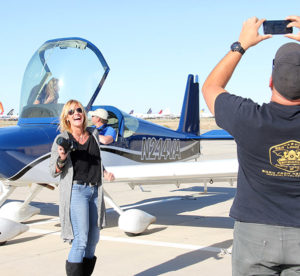 Jazzed up! Linda Sherar, from Temecula, Calif., gets her photo taken by Michael Jackson after a ride in a Vans RV-14 piloted by Adam Burch during the 5th Annual Mojave Experimental Fly-in. Branch also spoke at the Plane Crazy monthly event with Rian Johnson of Vans Aircraft. Sherar is now considering flying lessons. The RV-14 homebuilt kit can be purchased for $80,000.

Red Bull recently approached Seguin to do an episode on the Quickee, but Seguin was nowhere ready.

“Do you know how hard it is to put two turbo engines on an experimental aircraft and get it airworthy within a month? Not easy, but we did it,” said Seguin. Previously a design engineer for Scaled Composites, Seguin has 300 hours flying in Proteus and WhiteKnightTwo, and is now working with other companies and countries to expand the envelope of flight.

Adam Burch and Rian Johnson of Vans Aircraft introduced their homebuilt RV-14 kit plane which is easier to build with step by step instructions and has a bigger cabin than previous models.

“We listened to what our customers wanted,” said chief test pilot and design engineer, Johnson. Kits can be purchased for around $80,000. “A problem we do have is when people modify the aircraft for their special needs and start drilling where they shouldn’t. Call us before you do anything like that and we will give you our recommendations,” said Johnson, who is based in Oregon.

At the awards banquet, trophies for Best Design went to Kevin Eldredge of Lycoming Engines; Andrew Findlay of One Moment Air Racing Team won for Experimenter of the Year; Best Test went to Rian Johnson of Vans Aircraft, Best Attempt to Tom Siegler and Best Build was presented to Joe Correggio. The beautiful, LED trophies were designed and made by Niki Dugue, a design engineer at Scaled Composites. 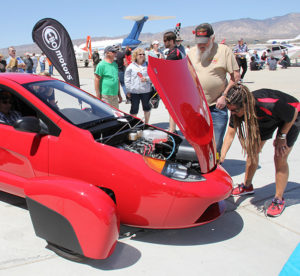 Pam Vassallo (far right) shines up Elio, a two-seat commuter vehicle that can get up to 86 miles per gallon and starts under $7,000 at the 5th Annual Mojave Experimental Fly-in at the Mojave Air and Space Port, Mojave, Calif. Elio Motors expects to employ up to 1,500 people in Shreveport, La., and approximately 52,000 people have already signed up to own the vehicle. Production is scheduled to begin in 2017.

Hosting the banquet in her hanger, she said her life changed the moment she went on her first airplane ride at the age of four. “This is the same spirit that was here in the late 1960s, when Burt Rutan established the Rutan Aircraft Factory and when the National Air Races were held here at the former Marine Corps Air Station. Elliot (Sequin) does a fantastic job attracting all of the young, accomplished pilots and engineers from across the U.S. to come and experience why we love this airport.”