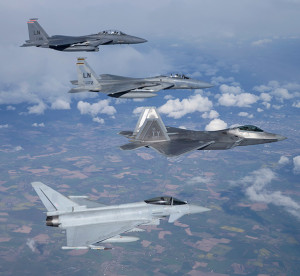 A four-ship formation consisting of a U.S. Air Force F-15E Strike Eagle, an F-15 Eagle, an F-22A Raptor, and a Royal Air Force Typhoon fly together during a training sortie April 26, 2016. Airmen and aircraft from the 95th Fighter Squadron deployed from Tyndall Air Force Base, Fla., and conducted air training exercises with other U.S. and RAF aircraft during a course of several weeks.

Twelve F-22 Raptors from the 95th Fighter Squadron and about 220 Airmen from Tyndall Air Force Base, Fla., completed on May 8 a month-long deployment to Royal Air Force Lakenheath.

This historic deployment was the largest Raptor deployment in Europe to date and is part of their Global Response Force training.

“The F-22 deployment to RAF Lakenheath makes perfect sense,” said Col. Robert Novotny, the 48th Fighter Wing commander. “Lakenheath is the home (to) combat fighter aviation in Europe; it’s the place where we work with our NATO allies to sharpen our tactical skills and reaffirm to our commitment to the alliance.”

During the deployment, the F-22s participated in exercise Iron Hand 16-3, conducted air training with all three RAF Lakenheath fighter squadrons and RAF Typhoons. The Raptors also forward deployed to Romania and Lithuania, both NATO countries, and participated in the commemoration of the 100th anniversary of the Lafayette Escadrille in Paris.

“Deploying Raptors here and integrating with our efforts in these areas has been a phenomenal success,” Novotny said. “During their deployment, we were able to integrate seamlessly into some of the largest fighter exercises in Europe.”

According to 1st Lt. Jolly Foss, a 95th FS Raptor pilot, training with the Typhoons was one of the main objectives for deploying to the U.K.
“There’s different capabilities here, different airspace that we don’t have access to back home and being able to integrate with the three F-15 Eagle squadrons and with the Typhoons has allowed us to go through our exercise objectives,” Foss said.

Foss explained the different type of training sorties while deployed to the U.K.

“We had some long sorties, where you send anywhere between 10-12 jets on the blue side against 10 aircraft on the red side; tactical sorties, where we look into destroying targets on the ground; and strictly defensive counter air, which is keeping the enemy from approaching that line,” Foss continued. 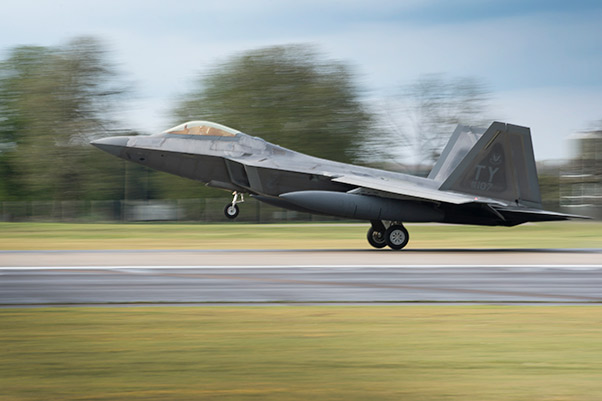 An F-22 Raptor from the 95th Fighter Squadron lands at Royal Air Force Lakenheath, England, April 12, 2016. The aircraft arrival marked the second time the U.S. European Command has hosted a deployment of F-22 aircraft in the EUCOM area of responsibility.

“Sending the Raptors into Low Fly Area 7 (Mach Loop in Wales) was an opportunity for their low-altitude qualified pilots to see firsthand the amazing training opportunities we have in the United Kingdom. The training ranges and low flying airspace here are some of the best in the world,” Novotny said.

The F-22s forward deployed to Eastern Europe to maximize training opportunities and demonstrate the United States’ commitment to NATO allies.
“The intent of the exercise was to show the capabilities of ‘rapid Raptors’ by taking two F-22s to Lithuania and Romania, along with our support assets on a tanker, and being able to go anywhere in the world with very little coordination and notice,” Foss said.

According to Novotny, many lessons were learned that will ensure faster, simple and if necessary more lethal deployments in the future.