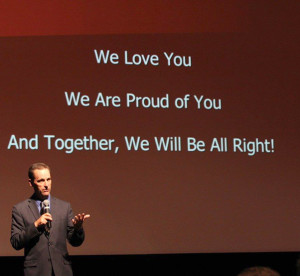 Congressman Steve Knight speaks to parents and students at a send-off event where 16 students will be going to some of the top colleges in the country. Out of 40 applications, Knight’s Academy Selections Committee selected four students to attend military academies. Knight said he prays daily for his family, the country and the military- that every day is Memorial and Veteran’s Day.

Sixteen students will soon be embarking on a new journey — a military education at some of the most prestigious colleges in the country. Out of those students, four were nominated by Congressman Steve Knight.

“I asked my committee to choose the best of the best and here they are,” said Knight at a send-off event ceremony in the Performing Arts Theater at the Antelope Valley College on Father’s Day weekend.

Nicholas Drinhaus of Palmdale was chosen for the U.S. Air Force Academy. Both Connor Lewis of Valencia and Delaney Marbach of Stevenson Ranch were selected for the U.S. Military Academy at West Point, and Ian Caddow of Saugus was chosen as the nominee to both the U.S. Merchant Marine Academy and the U.S. Naval Academy.

With humor and humility, Cadet 1st Class Joshua Kay, a senior at the U.S. Military Academy at West Point and Cadet 3rd Class Nicholas Cody Chew, who is attending the U.S. Air Force Academy, gave advice to the students.

When Kay was about four years old, his father took him to a version of an Army airshow where he saw troops propelling from a Blackhawk with their backpacks and weapons. “Something about that put a spark inside of me,” said Kay who graduated from Desert Christian High School and will graduate West Point as a Second Lieutenant. He will be serving in the infantry- propelling from Blackhawks.

Sharing some advice he wished someone would have told him, Kay advised students to learn to become followers, to enjoy themselves, to remember that they are not in completion- teamwork is essential, and to always remember the importance of safety.

“If you receive an appointment today, you are already a leader,” explained Kay. However, in these colleges, only the best are chosen and the best in high school are only average in basic training. “In the academy during your first year, there is nobody below you- you’re it! You are going to have to use a lot of teamwork, you are going to have to be a follower for nearly a year – it will make you a better leader.”

“The most valuable resources are the people around you,” said Cadet 3rdt Class Nicholas Cody Chew, who reminded students not to forget how good they have it, even when they are crawling in the mud during basic training.

Currently, less than one percent of our nation’s population protect the rights and the freedoms of the other 99 percent of us by serving in the United States armed forces. “They will be the first to tell you that putting on a uniform does not make you a hero,” said Ellie Kay, author of “Heroes at Home.” “But putting on that uniform and wearing it with a sense of integrity first, service before self, and excellence in all you do; now that is pretty heroic.” The second heroes she explained are the family and community leaders who support the troops back home.

The Knight Academy Selections Committee interviewed 40 applicants on Dec 5, 2015. “It was a long day and I am pleased that the committee members did their best to treat every applicant as if he or she was their first,” said Fergione, a retired Navy Captain and test pilot, who has flown over 6,400 flight hours in over 50 different aircraft.

When asked to list his accomplishments he has attained in his life, Fergione said, “of all of the things I have done, the good, and the not so good, what I am most proud of is that I am able to say, I am a Veteran.”