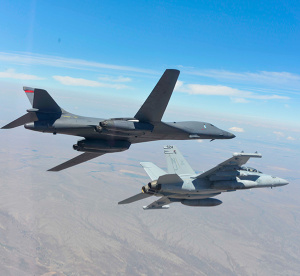 A B-1B Lancer and EA-18G Growler bank to the left during a training sortie near Ellsworth Air Force Base, S.D., July 15, 2016. The training focused on further improving joint mission tactics between the Air Force and Navy.

Navy EA-18G Growlers have joined B-1B Lancers during the past several weeks in the skies around Ellsworth Air Force Base, S.D., for electronic attack training.

This marked the first time the Navy’s Electronic Attack Squadron 129 (VAQ-129), stationed at Naval Air Station Whidbey Island, Wash., travelled to Ellsworth AFB to conduct training in its local airspace. The training was conducted in June and is also taking place from July 11-22.

Navy pilots and electronic warfare officers utilized the unique components of the Powder River Training Complex airspace to help accomplish its role as the fleet replenishment squadron for the EA-18G.

“We are one of two aircraft in the U.S. military inventory that is capable of accomplishing the electronic attack role,” said Navy Lt. Matthew Galamison, an EA-18G instructor. “It’s very important that our aircrew get the training and range that they need with the proper emitters in order to practice against threats that are out there.”

Part of the Growler’s mission in combat is to deny, degrade or delay the enemies’ ability to acquire and engage friendly air forces and also give bombers or fighters access to those targeted areas, Galamison said. During the EA-18G’s time at Ellsworth AFB, B-1B bombers have joined the Navy aircraft to train to these sorts of mission sets.

The lethality of worldwide anti-access and area-denial capabilities and the need to operate in a contested electromagnetic spectrum shows the necessity for electronic warfare missions.

“This training is unique,” said Air Force Lt. Col. Allen Geist, the 390th Electronic Combat Squadron commander. “The Growler community is the one community that strategically looks at using electronic warfare, an ability that allows our aircraft to access denied environments.”

VAQ-129 has the distinct role of providing airborne electronic attack training for both the Air Force and Navy. Its home station, NAS Whidbey Island, also hosts the 390th ECS, the Air Force’s sole AEA unit at NAS Whidbey Island, as part of the Joint Airborne Electronic Attack Program. The 390th ECS is a geographically separated unit of the 366th Operations Group out of Mountain Home AFB, Idaho.

In 1995, after the Air Force divested its AEA aircraft, the Office of the Secretary of Defense directed electronic warfare airmen be embedded with the Navy’s EA-6B Prowlers, and now EA-18G. Under a memorandum of understanding between the Air Force and Navy, select Air Force EWOs and pilots continue to embed on Navy electronic warfare missions through a competitive exchange program.

“The Air Force has always been interested in maintaining a knowledge of airborne electronic attack,” Galamison said. “There are more capable threats with new tactics emerging, which is why the exchange program between the Air Force and Navy exist so both B-1 and F-15 (Eagle) aircrew can come to Whidbey for one to a couple of years to learn how airborne electronic attack operates.”

Galamison added with the exchange program, Air Force aircrews can take the knowledge they have learned on AEA and bring it back to the Air Force to make integration of other aircrews easier during large force exercises, such as those held in the Powder River Training Complex.

“The great thing about coming out to Ellsworth to use the Powder River Training Complex is its size and threat emitters that we can utilize,” said Geist, a former B-1B weapon systems officer. “It gives us a great training opportunity and definitely builds the foundation for the electronic weapons officers to have the expertise to take down enemy integrated air defense systems.”