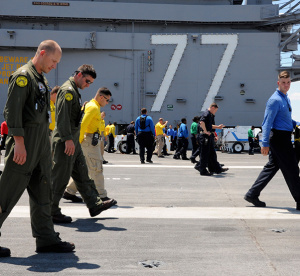 Sailors conduct a foreign object debris (FOD) walkdown on the flight deck of the aircraft carrier USS George H.W. Bush (CVN 77). FOD walkdowns are performed to remove objects on the deck that could damage a jet engine’s intake, compressor blades or related components. GHWB is participating in a fast cruise to complete her planned incremental availability at Norfolk Naval Shipyard.

“The crew has made huge strides in preparing for sea after more than a year in the shipyard,” said Chief Engineer Cmdr. Cory Groom. “Now we’ll put our hard work to the test before we head out to sea.”

The crew of GHWB completed several major milestones during PIA to include replacing 67,000 feet of cable, performing an overhaul of the Vacuum Collection Holding and Transfer system, and the installation of two MK 15 Phalanx close-in weapon systems.

During fast cruise the crew will operate as if they are underway, carrying out daily operations and conducting shipboard drills. This allows leaders to assess the crew’s level of preparedness and test shipboard systems in a controlled environment.

This will be the first underway for many Sailors aboard GHWB. Sailors like Culinary Specialist Seaman Apprentice Jarred Horne, who has been in the Navy for 1 1/2 years, are optimistic about leaving the shipyard.

“I’m looking forward to the opportunity for more experience and to get a better understanding of CS life underway,” said Horne. “I know it’s going to be hard to adjust and the workload will be heavy, but it’s worth it.”

After fast cruise, GHWB will conduct sea trials before returning to its homeport at Naval Station Norfolk. The crew will then begin preparing for an upcoming deployment as part of the George H.W. Bush Strike Group.

“Reaching the end of our PIA period shows the strength, resiliency, and commitment of our crew in meeting the mission, and they’re just getting started,” said Command Master Chief Huben Phillips. “I am excited for what the future holds, and I can see that excitement in our Sailors. I’m looking forward to seeing all that they will accomplish.”

George H.W. Bush is currently undergoing the final stages of a PIA at Norfolk Naval Shipyard.