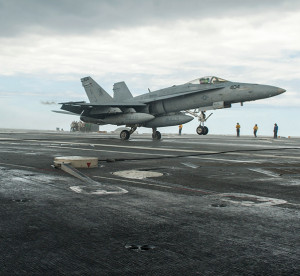 An F/A-18C Hornet attached to the “Bulls” of Strike Fighter Squadron (VFA) 37 performs a touch-and-go on the flight deck of the aircraft carrier USS George H.W. Bush (CVN 77). GHWB recently started a training and qualification cycle in preparation for a 2017 deployment.

“I’m enjoying being aboard,” said Montague. “The ship looks great and the crew has treated us well. From the ship side, all the equipment performed perfectly. I’m thankful to be a part of this operation.”

The landing also marked the first successful use of the arrested landing gear during GHWB’s flight deck certifications.

“I finally get to do my job, lead my Sailors and move combat aircraft to and from the hangar deck so they can deploy,” said Chief Aviation Boatswain’s Mate James Brinson, hangar deck chief petty officer.

To deploy, GHWB must certify the effectiveness of their flight deck and flight deck teams.

“Flight deck certification is important because we have to certify that all the flight deck teams, hangar deck teams and all of the major systems involved with aircraft are able to do the aircraft carrier job, which is to launch and recover aircraft,” said Brinson.

“There are so many dangers in the aviation community,” said Brinson. “The arresting cable can snap, an aircraft can crash or catch fire which can almost down the ship, it is imperative we are trained to combat any potential incidents.”