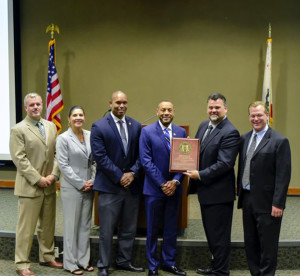 More than 13,000 defense contractors were eligible and only 42 received the Cogswell Award.

To be considered for the Cogswell Award, a facility must have two consecutive superior industrial security review ratings. Northrop Grumman’s Palmdale Aircraft Integration Center of Excellence received three consecutive ratings of “Superior” in the last three years. “The Palmdale facility has an extraordinary security program that represents Northrop Grumman’s values of performance and excellence,” said “Andy Reynolds, vice president, global manufacturing and Palmdale site manager, Northrop Grumman. “I am extremely proud of our security team in working as a trusted partner to our customers and peers, both internally and externally to receive the Cogswell Award.”

The DSS’s award criterion focuses on principles of industrial security excellence. Factors include establishing and maintaining a security program that exceeds basic National Industrial Security Program requirements and providing leadership to other cleared facilities by establishing best practices, while maintaining the highest standards for security.