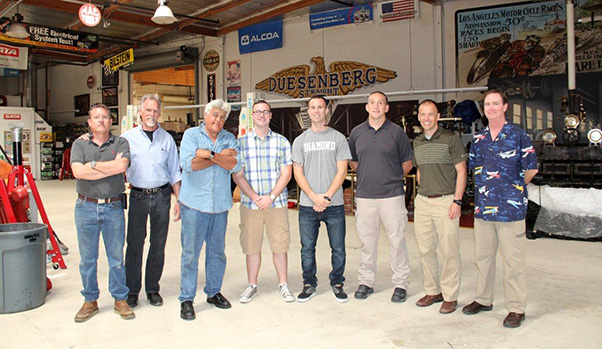 “Fantastic!” and “Incredible!” – Just a few of the words used to describe Jay Leno’s collection of priceless cars and motorcycles by members of the 412th Operations Support Squadron from Edwards Air Force Base, Calif., who were treated to a very personal tour of Leno’s Big Dog Garage and later, a surprise tour by Rod Emory of Emory Motorsports.

“We couldn’t get past that it really was Jay Leno’s Garage!” exclaimed Lt. Col Mark Massaro, commander of the 412th OSS and an F-35 test pilot. “Seeing him drive up in his blue ’53 Corvette and cook lunch for the workers was a real treat.” Massaro and his team also enjoyed the gigantic oil paintings and other historical memorabilia.

This is not the first time Leno and Edwards’ personnel have met. Earlier this year, Leno and his crew filmed his EcoJet car as it raced down one of Edwards’ many runways. The show will be airing later this year on CNBC “Jay Leno’s Garage.”

Music videos, blockbuster films and celebrities are nothing new to Edwards’ personnel, however. Airmen say that Leno and his crew are perhaps the most genuine, humble and friendliest people they have encountered.

Much like pilots who were exposed to flight at a young age, Leno fell in love with cars at the age of nine when he slipped into the driver’s seat of a 1954 Jaguar XK120. Later in life, he found that same car and it is now a part of his collection. “It started the love affair,” says Leno. 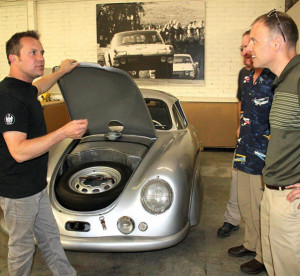 Rod Emory (left) of Emory Motorsports shows Lt. Col Mark Massaro, Commander of the 412th Operations Support Squadron, how his team handcrafts rare Porsches and builds a 356 Outlaw class, combining the nostalgic look with the modern driveline and suspension. Emory’s team restored the 1949 Porsche Gmund SL 356/2 that won its class in the 1951 Le Mans. It is considered priceless and the most significant Porsche in the world.

“Edwards is this amazing community of flight test research and development of human physiology,” says Thompson, who also owns A2ZFX and Sage Cheshire, the company who designed and built the Red Bull Stratos project. “From the civilian perspective, if I can learn and relay information about Edwards to our community, it helps to see how Edwards benefits us as a community and society. It also helps to show our appreciation to our military and invite them to be a part of our community,” explained Thompson. Previously, Thompson invited the F-22 Fighting Falcon maintenance crew to the tour. “Hollywood people are just as excited to meet our folks and come to Edwards,” said Thompson.

After receiving a personal tour from John Pera, who has worked with Leno for 24 years, and has quite a motorcycle collection of his own, OSS chatted with Leno and took a few photographs.

Not far away, OSS then received a tour from Rod Emory of Emory Motorsports and saw how Emory’s team handcrafts priceless and rare Porsches. Massaro said watching Emory’s team reminded him of some of the restoration that takes place on jets at Edwards. 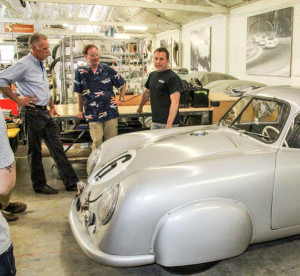 “We really appreciate Rod taking the time to explain the process and for showing us the craftsmanship required to create their product,” said Massaro. “It was a real treat to see the 356 SL Porsche!”

“Edwards is probably known more around the country than by people in our own back yard — and we need to do more to change that,” said Thompson who is also a chairman of the Flight Test Historical Foundation. Since 9/11, guests wanting to see the museum have to be prescreened and it can take weeks or months before access is granted. The foundation is raising money to move it outside of Edwards’ security gates.