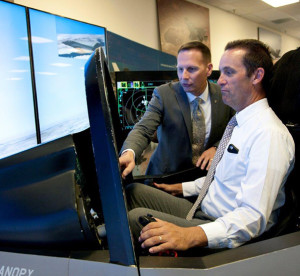 Lockheed Martin showcased its F-35 Lightning II mobile cockpit demonstrator to business and community leaders on Sept. 1, while updating them on the world’s most advanced fighter at its Skunk Works facility in Palmdale, Calif.

“I’m not promoting the F-35 because it provides jobs to the Antelope Valley, although it does that and a whole lot more — I stand behind it because America and our allies need it,” Congressman Steve Knight said with pure conviction. “We have not been in a dogfight for more than 50 years and I’m proud of that — there is a reason for that.”

Living most of his life in the Antelope Valley, Knight personally knows the value of a strong military. He has spent plenty of time with pilots and also served in the U.S. Army. He also serves on the House Committee on Armed Services. If pilots don’t like or believe in the product, they would tell him.

“Everyone I know says this aircraft is superior,” claims Knight. He said problems occur with the bureaucratic hold ups in Congress. “Back in the day, if a canopy was cracked, maintenance would simply replace it — now it goes on social media and way too many people get involved. We need to get our planes to our war fighters and cut the red tape.”

More than 3,100 F-35s are scheduled for production, with each partner country contributing to the program. The United States, Australia, Italy, Netherlands, Norway and the United Kingdom have all received the first of their F-35s, and Israel and Japan will receive theirs later this year.

Using the latest technology, Knight said the 5th generation fighter is performing as promised and thanked several aerospace partners in the audience for their contributions to the program, including Northrop Grumman.

“The state of California is a very important part of the team manufacturing the F-35, with the program supporting nearly 22,000 direct and indirect jobs and creating an economic impact of $10 billion,” said Eric Van Camp, director, F-35 Business Development. The program is expected to continue through 2050.