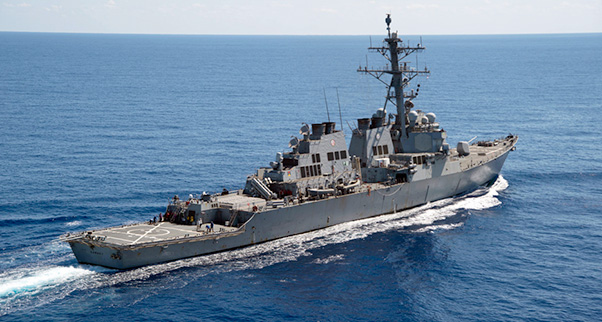 The SEWIP Block 2 System has already been deployed on several Guided Missile Destroyers DDG class ships, including the USS Carney.

Lockheed Martin continues to make technological advances in its electronic warfare portfolio that will keep the warfighter a step ahead.

Under this full-rate production contract, Lockheed Martin will provide additional systems to upgrade the AN/SLQ-32 systems on U.S. aircraft carriers, cruisers, destroyers and other warships with key capabilities to determine if the electronic sensors of potential foes are tracking the ship.

“The SEWIP Block 2 System is critically important to the Navy’s operation, and we are proud to continue to provide this capability to the warfighter,” said Joe Ottaviano, electronic warfare program director. “Threats are becoming increasingly sophisticated. Our electronic warfare systems give the warfighter information to enable a response before the adversary even knows we’re there.” 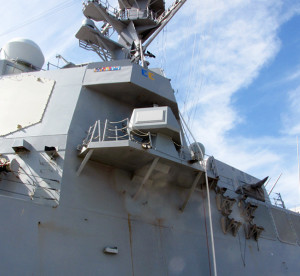 A SEWIP Block 2 system is shown here after being installed on the USS Bainbridge guided-missile destroyer in 2014.

The system is the first sensor to be fully compliant with the Navy’s Product Line Architecture strategy, which facilitates the rapid introduction of new technology into the fleet.

Block 2 is the latest deployed improvement in an evolutionary succession of “blocks” the Navy is pursuing for its shipboard electronic warfare system, which will incrementally add new defensive technologies and functional capabilities. Block 2 provides an upgraded antenna, receiver and improved interface with existing ship combat systems.

Lockheed Martin was awarded the design and development contract for this program in September 2009.  Since then Lockheed Martin has been awarded Low Rate Initial Production (LRIP) contract for an additional 38 units and 22 of these units have been delivered to the Navy on schedule.
Work will be performed at the company’s Syracuse, N.Y., facility.