Friends, family and fans from around the country came together to commemorate the 75th anniversary of the Doolittle Tokyo Raid April 17-18, 2017, at the National Museum of the United States Air Force located at Wright-Patterson Air Force Base, Ohio.

The April 18, 1942, Doolittle Raid on Tokyo was an important event in the development of American air power as it was the first combat use of strategic bombardment by the U.S. Army Air Forces in World War II.

Led by Lt. Col. James “Jimmy” Doolittle, the Raiders consisted of 16 B-25 Mitchell bombers and 80 Airmen, all volunteers from the 17th Bombardment Group (Medium). They bombed military targets in five Japanese cities, causing only minimal physical damage, but huge psychological damage to Japanese military leaders and civilians, according to historians. The actions of the Raiders forced Japanese combat units to withdraw from the frontline to defend their homeland and cast doubt upon the ability of Japan’s military leadership. It became a huge psychological boost for the American people.

Of the 80 Doolittle Tokyo Raiders, more than half survived World War II. Three lost their lives when their aircraft crashed during the raid, three were executed and one died as a prisoner of war. Twelve more Raiders died during WWII, with 10 of them killed in action.

Early Air Force pioneers like the Doolittle Tokyo Raiders represent a generation of proud Americans who saw the U.S. through one of the most difficult times in its history. The Raiders represent the spirit of creativity and innovation, progressively growing the service into the modern day Air Force of today, according to Dr. Doug Lantry, the NMUSAF historian.

The two-day tribute began the morning of April 17, with 11 B-25 aircraft arriving from around the country and being placed on static display on the grounds of the museum for public viewing. The event continued on the Wright-Patterson AFB flight line as two B-1B Lancer aircraft from the 28th Bomb Wing at Ellsworth AFB, South Dakota were positioned on static display outside the base operations building for a nose art unveiling ceremony and christening of one of the aircraft as the “Ruptured Duck” – in honor of one of the B-25B aircraft that took off from the aircraft carrier USS Hornet during the Doolittle Raid. 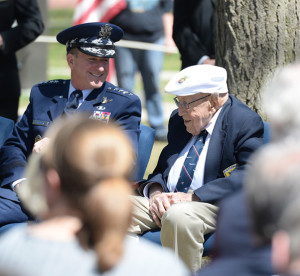 On the morning of the second day of the event, retired Lt. Col. Richard E. Cole, the sole surviving member of the Doolittle Raiders, was joined by members of his family, family members of Staff Sgt. David Thatcher, honorary Raiders and senior Air Force leaders for a private Goblet turnover ceremony in the Arnold Room of the museum. Cole turned over Thatcher’s goblet to honor his fellow Airman, who passed away June 22, 2016.

“The Raiders never felt like they were any more important than the other WWII personnel. They were amazed to be singled out and treated with such honor. They never looked at the mission as any type of a one-way, or suicide mission,” said Cindy Chal, Cole’s daughter.

Later that afternoon, crowds gathered at the museum’s Memorial Park to honor the 79 members of the original Raiders who had passed. The B-25s performed two flyovers prior to the start of the service, one in the missing man formation. Guest speakers included Air Force Chief of Staff Gen. David L. Goldfein; Cole, now 101 years old, who flew as Jimmy Doolittle’s co-pilot; Jeff Thatcher, son of David Thatcher; and retired Lt. Gen. Jack Hudson, the National Museum of the United States Air Force director.

“Today we observe the 75th anniversary of a mission that electrified our nation and raised its morale during a time of dire need. A mission consisting of 80 volunteer Airmen – enlisted men and officers alike, led by Lt. Col. James H. “Jimmy” Doolittle, a man small in physical stature, but a giant in terms of leadership and courage. A mission known as Special Aviation Project Number One, the first major joint operation since the Civil War,” said Jeff Thatcher during the ceremony.

At the conclusion of the memorial service, two B-1 bombers flew over Memorial Park at a speed of 0.9 Mach and ascended into an unrestricted climb as a tribute to the Doolittle Tokyo Raiders, who pioneered the concept of global strike, the idea that no target on earth is safe from American airpower.

A B-1 Lancer bomber from Ellsworth AFB, S.D., was rechristened the “Ruptured Duck”. New nose art was also unveiled on the B-1 in tribute to a B-25 Mitchell bomber flown during the Doolittle Raid in 1942.

Ellsworth AFB’s 34th and 37th Bomb Squadrons were the same squadrons selected by Lt. Col. James Doolittle to attack the Japanese homefront with hopes of raising the morale of allied troops during World War II. 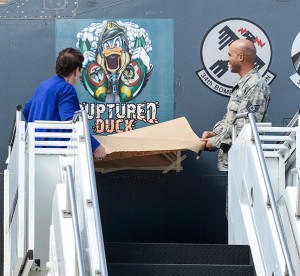 Attending the noon ceremony, held along the Wright-Patterson AFB flight line, was Richard E. Cole, a retired lieutenant colonel who served as Doolittle’s co-pilot on Crew Number 1. Cole, now 101 years old, is the sole surviving Doolittle Raider. He was joined by his daughter, along with the wife and family of Sgt. David Thatcher, who flew as the engineer/gunner on the Ruptured Duck. Thatcher died in June 2016.

“Tomorrow (April 18), we will celebrate the anniversary of the Doolittle Raid, when Crew Number 7 took off from the deck of the carrier USS Hornet in their Mitchell B-25B bomber along with the 15 other crews comprising the historic mission to bomb Tokyo and four other Japanese cities in retaliation for Japan’s surprise attack (in) December 1941 on Pearl Harbor,” said Jeff Thatcher, David Thatcher’s son.

“This action commemorates a single plane of 16, which symbolizes all the men of the Doolittle Raid who flew into an unknown fate and who completed their mission with valor,” said Capt. Devin Ivy, a member of the 28th Operations Support Squadron from Ellsworth AFB, and the event’s emcee. “The crews will fly in the new Ruptured Duck and carry the legacy of all the Doolittle Raider crews into the future as part of the defense of the United States of America.”

“It is with sincere gratitude that I stand before you today accepting this christening of the new Ruptured Duck,” said Col. John Martin, the 28th Operations Group commander at Ellsworth AFB. “What a privilege to stand with the wife and family of Sgt. David Thatcher, (Lt.) Col. Dick Cole and his family – two bomber legends and heroes from an epic point in American wartime folklore.” 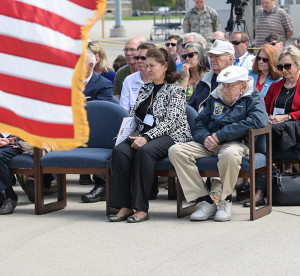 Retired Doolittle Raider, Lt. Col. Dick Cole, (front right) watches an unveiling ceremony for the new Ruptured Duck artwork, Apr. 17, 2017 at Wright-Patterson Air Force Base, Ohio. Cole is the last remaining member of the original Doolittle Raiders who took off from an aircraft carrier to deliver the first strike of the war on Japanese homeland.

Today’s modern Raiders of the 34th and 37th Bomb Squadrons proudly continue that legacy of leadership, he said.

“On the wings of aircraft like the new Ruptured Duck, the 34th and 37th Bomb Squadrons continue to write their own chapters in our nation’s history, leading with valor and punctuating their mark with the emblems of the Raider,” Martin said.