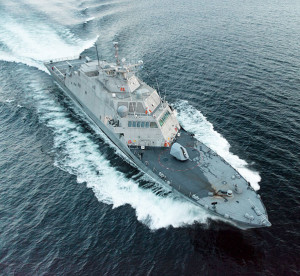 The U.S. Navy accepted delivery of the future USS Little Rock (LCS 9) during a ceremony at the Fincantieri Marinette Marine shipyard in Marinette, Wisc., Sept. 25.

Little Rock is the 11th littoral combat ship (LCS) to be delivered to the Navy and the fifth of the Freedom variant to join the fleet. Delivery marks the official transfer of the ship from the shipbuilder, part of a Lockheed Martin-led team, to the U.S. Navy. It is the final milestone prior to commissioning, which is planned for December in Buffalo, N.Y.

“Today marks a significant milestone in the life of the future USS Little Rock, an exceptional ship which will conduct operations around the globe,” said Capt. Mike Taylor, LCS program manager. “I look forward to seeing Little Rock join her sister ships this fall, with 100 percent of propulsion power available for unrestricted use.”

“We are excited to welcome the future USS Little Rock to the Fleet,” Johnston said. “Successful completion of this milestone is another important step to bring more LCS to the Fleet. We look forward to completing the building phase of Little Rock and moving on to the operational and deployment phases of each subsequent LCS. Our ability to operate for extended periods of time from forward operating stations will provide our Fleet commanders more flexibility and posture overseas.”

COMLCSRON ONE and TWO support the operational commanders with warships ready for tasking by manning, training, equipping and maintaining littoral combat ships in the fleet.

LCS is a modular, reconfigurable ship with three types of mission packages including Surface Warfare, Mine Countermeasures, and Anti-Submarine Warfare. Program Executive Office for Littoral Combat Ships is responsible for delivering and sustaining littoral mission capabilities to the fleet. Delivering high-quality warfighting assets while balancing affordability and capability is key to supporting the nation’s maritime strategy.

The LCS-class consists of the Freedom variant and Independence variant, designed and built by two industry teams. The Freedom variant team is led by Lockheed Martin (for the odd-numbered hulls, e.g. LCS 1). The Independence variant team is led by Austal USA (for LCS 6 and follow-on even-numbered hulls). Twenty-seven LCS ships have been awarded to date: 11 have been delivered to the Navy, 13 are in various stages of construction, and three are in pre-production states.