A white picket fence lined one half of a hangar’s entrance, channeling people to an open area inside with plants placed beside park benches. Directly across from them, a long, black wall stretched across the area — its smooth, dark surface etched with the names of 58,318 service men and women who died during the Vietnam War. It is a smaller, near perfect replica mirroring the one in Washington, D.C.

One man, an Army veteran, approached the wall. He went directly to a particular panel and began reading the names. “I’m looking for Vernon Shrock,” he said.

Shrock had been a private in the U.S. Army when they first met and became good friends – Shrock was later killed by an explosive in Quang Ngai, Vietnam.
His fingers found the name and his voice faltered. “There he is,” he said as his eyes clouded with tears and his fingers tapped the name a few more times. “There he is. He was just a kid … when he died.”

This veteran and many others came to visit the Mobile Vietnam Memorial Wall, sometimes called the AV Wall, an installation special to the 2017 Marine Corps Air Station Miramar Air Show at MCAS Miramar, Calif., Sept. 22 to 24. The wall is a half-scale replica of the Vietnam War Memorial in D.C., and volunteers with Point Man Antelope Valley (PMAV) maintain it.

The theme for the air show is “A Salute to Vietnam Veterans,” a theme MCAS Miramar and 3rd Marine Aircraft Wing leaders treated with a solemn regard.

“[We] were at a veterans event last year … They asked folks from different conflicts to stand up, a few from Korea stood up, a few from World War II and the entire place stood up when they asked for Vietnam,” said Col. Jason Woodworth, commanding officer of MCAS Miramar. “The theme we chose this year ‘a salute to Vietnam veterans’ was because of a realization that it was time to say ‘thank you’ to a generation of Americans that served during a very difficult time.” 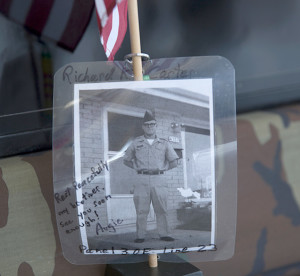 A picture of Sgt. Richard Carter, a soldier who died during the Vietnam War, rests in front of the Mobile Vietnam Memorial Wall, also known as the AV Wall, during the 2017 Marine Corps Air Station Miramar Air Show at MCAS Miramar, Calif., Sept. 22. Carter’s brother, Augie Anderson, is an AV Wall volunteer and placed the flag and photograph as a way to remember Carter, who died Nov. 19, 1967. Anderson wrote “Rest peacefully my brother, see you soon enough!”

AV Wall volunteers observed Vietnam veterans, surviving family members, friends and active-duty service members as they entered the hangar to find and pay homage to their loved ones, many of whom died during the war and others who remain missing, even to this today.

If anyone needed help finding a certain name, volunteers readily stepped in to assist.

“We’ve actually heard people say ‘we came because we knew there was going to be a wall,’ ” said Stacia Nemeth, an AV Wall volunteer. “So many of the Vietnam veterans felt so unappreciated upon their return from war … they are reaching out and needing a hug, needing a thank you, needing a handshake.
I’ve had a couple of them say: nobody has ever said to me ‘thank you for your service’ and ‘welcome home.’ ”

One volunteer in particular, Augie Anderson, said he viewed his service as a way to grieve the death of his brother Sgt. Richard Carter, a soldier from Milwaukee, Wisconsin, who died Nov. 19, 1967, in Tay Ninh, Vietnam.

“He had 11 days left before he was due to come home. I miss him a lot but it is what it is,” said Anderson. “I like coming out here and helping other people find friends or family and do grieving and mourning in their own way. Doing this volunteer work with the wall – that kind of helps me with my ‘coming to grips’ … Look at all the names on there. I’m just one of 58,318.”

Anderson remembers his brother by placing an American flag accompanied by a photograph of his brother in uniform, positioned in front of the wall beneath his name.

“Rest peacefully my brother,” Anderson wrote on the photo. “See you soon enough!” 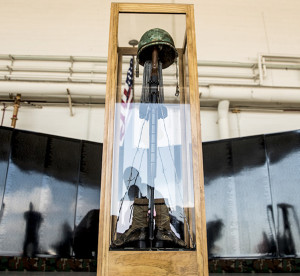 Other people came to take photographs of names. Some copied the engraving with a sheet of paper and a pencil, others sat in silence and still others found solace in sharing bits and pieces about their loved ones, who live on in memory alone.

Twice a day, volunteers held a pinning ceremony and formally recognized any Vietnam veterans who attended, thanking them for their service.

With the air show’s close, the memorial wall will return to its home in Lancaster, California. However, each name on the wall is available through an online database at www.vvmf.org, which shares information about the service men and women whose names exist on the memorial wall – enabling people to find their loved ones, view photographs, rank and branch of service, location on the memorial, place of death and more.

“The nice thing now is that it’s our opportunity to honor those heroes,” said Maj. Gen. Mark Wise, commanding general of 3rd MAW. “We’ve got a very supportive community, and I can’t think of a better opportunity to bring everyone together to say thank you to our Vietnam guys.”