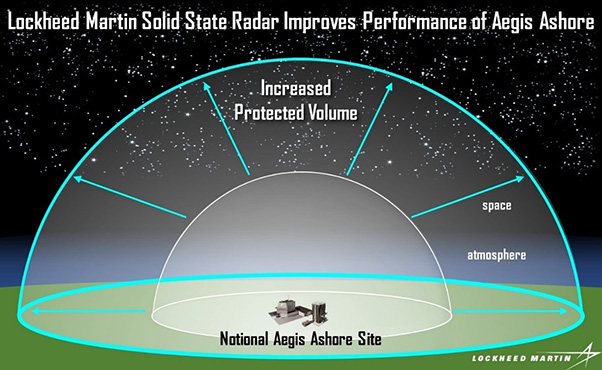 “Connecting these systems is more than a technological advantage – it’s a way to provide the warfighter with earlier intelligence and expanded situational awareness,” said Dr. Tony DeSimone, vice president and chief engineer of Lockheed Martin Integrated Warfare Systems and Sensors. “Integration of these technologies allows us to deliver the most advanced solid state radar system in LRDR with the proven tested capability of Aegis. For the warfighter this combination provides an increased capability, in terms of additional performance and reaction time, to safely protect the people and nations they defend.”

Connecting the two mature systems, amounts to a low risk ‘technology refresh’ of the legacy SPY-1 antenna, resulting in:

Lockheed Martin Solid State Radar (SSR) is a scalable Gallium Nitride (GaN) based radar building block, which in addition to cutting edge performance provides increased efficiency and reliability. The Department of Defense’s newest Ballistic Missile Defense sensor, LRDR, will use thousands of Lockheed Martin SSR building blocks to provide enhanced target acquisition, tracking and discrimination data to the U.S. Ballistic Missile Defense System. LRDR completed its critical design review in 2017 and is on track to be operational in Alaska in 2020.

Aegis Ashore is the land-based ballistic missile defense adaptation of the proven Aegis Combat System, currently fielded in Romania and soon to be fielded in Poland.

The research and development demonstration proved that current and future versions of Aegis can simultaneously command tasking of the Lockheed Martin SSR and receive target tracks from the radar. The next phase of activity is to demonstrate simulated missile engagements with live tracking, scheduled for the first half of 2018. These tests build on multiple previous demonstrations in 2015 and 2016, in which Aegis software variant Baseline 9 already tracked live targets using a prototype version of Lockheed Martin SSR hardware powered by multi-purpose Fujitsu GaN from Japan.

The Aegis software has evolved over time and is now compatible with multiple radars. Recently, Australia and Spain selected Aegis configurations featuring their own solid state radars. Weaving existing systems together is becoming more common to stay ahead of threats efficiently, by leveraging prior or concurrent investments in advanced technology.

“The Aegis Combat System is adaptable and flexible to address war fighting needs, which is one of the reasons the system is so widely used around the world,” said Michele Evans, vice president and general manager of Lockheed Martin Integrated Warfare Systems and Sensors. “As our customers look to update their technology with the help of their industrial bases, they are increasingly choosing alternative radars to equip their platforms. In challenging threat environments, we can deliver advanced capability at lower cost if we can be flexible and connect a variety of existing technologies.”

Lockheed Martin SSR, including very robust participation from Japanese industry, is one of the configuration options available to Japan for its upcoming Aegis Ashore installations. Because Lockheed Martin provides the Aegis Ashore software and SPY-1 radar, its SSR can operate in a way that uses a common Integrated Air and Missile Defense Aegis baseline with the one recently purchased by Japan’s Ministry of Defense for its new destroyers.