Nearly everyone has used a common glow stick to light up the night sky, or even as part of a highway emergency kit.

But these handy devices are also useful in the battlefield, and Air Force Research Laboratory researchers have discovered a way to make this useful tool even better.

Materials Engineer Dr. Larry Brott of the AFRL Materials and Manufacturing Directorate recently led an effort to improve glow stick technology for use in military applications. More commonly referred to as “chemlights” in military circles, these handy devices can be used for a variety of applications. They can be used as a wand for directing vehicles or providing emergency lighting, or the fluid inside can be splashed onto a surface to mark routes or positions.

These lights work through chemiluminescence, a reaction that produces light through the combining of chemical substances. In chemlights, this reaction is typically triggered by breaking or snapping an inner chamber to allow two substances to mix together. Depending on the mixture ratio, these devices can provide light for anywhere from a few minutes up to several hours. Chemlights can be dyed various colors or even made with dyes invisible to the naked eye.

While useful for a multitude of purposes, a problem with traditional chemlights is that they are single-use, meaning that users in the field may have to carry hundreds of them to accomplish a singular task. It is also somewhat awkward to use the chemiluminescent fluid to write messages or draw complex figures. 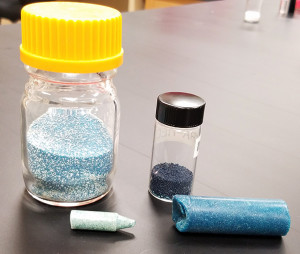 AFRL-developed microencapsulated chemiluminescent materials can be used to create “crayons” to write glowing messages or mark items in the field. This technology was recently licensed to startup company Battle Sight Technologies LLC for commercial production.

The AFRL team sought to address these issues through an innovative solution: microencapsulate the chemical substances and encase those capsules in a medium that can be used for writing or applying the material, much like a crayon or a lip balm applicator. The pressure of writing easily breaks the tiny capsules, creating the glowing effect. By packaging the materials in this fashion, a single stick can be used precisely and accurately many times, resulting in numerous benefits for the military.

Brott was inspired to investigate microencapsulation of chemiluminescent materials through his previous work in the automotive adhesives industry, where he became an expert in the technique. After coming to AFRL, he began to research ways to use microencapsulation to benefit the warfighter.

“This is such an intuitive use for this technology,” Brott said. “By packaging these materials in this form, we’re saving three things for the warfighter: volume, weight, and cost.” Brott and his team were awarded a patent for their work in 2012.

To further advance its development and use, the AFRL Materials and Manufacturing Directorate Technology Transfer office, led by Sunita Chavan, identified the researchers’ work to the Technology Acceleration Project, or TAP. TAP is a pilot project of the Entrepreneurs Center, a Dayton-based technology incubator that seeks to bring together researchers and entrepreneurs who are interested in taking technologies to the next level.

“We strive to make the most of our technologies. If the breakthroughs we achieve within AFRL can go forward into the commercial sector, we can better advance them to the benefit of everyone,” said Chavan. “This benefits the entrepreneur, that can apply and use the technology for commercial products, and the military, that benefits from the resulting technology maturation and reduced production costs.” 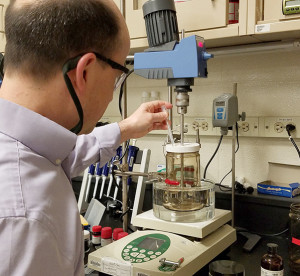 AFRL Materials Engineer Dr. Larry Brott demonstrates the process through which he microencapsulates chemiluminescent materials for use in applications such as multi-use glow stick “crayons.”

“As a former US Army soldier and warfighter, I instantly saw the impact this technology could have for the end users,” said Nick Ripplinger, company president. “After looking at it from a business standpoint it made sense to bring it to market.”

Ripplinger explained that when he became aware of the material breakthrough through TAP, he and partner Bennett Tanton became excited about the possibility of harnessing AFRL technologies and accessing the knowledge and expertise of project researchers.

After entering into a licensing agreement giving the company exclusive rights to use the AFRL technology for military and first responder use, Ripplinger says Battle Sight Technologies began product development. With the help of project partners, they are currently producing a prototype infrared writing device called the MARC, which stands for Marking Appliance Reusable Chemiluminescent. Once the initial prototype production run is complete, the product will go directly into the hands of the warfighter for field test and evaluation, possibly as early as Spring 2018. If all goes well, their goal is to have a fieldable product by late summer. 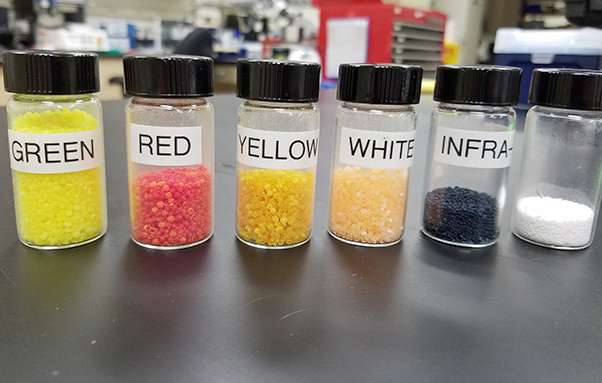 AFRL-developed microencapsulated chemiluminescent materials were recently licensed to Battle Sight Technologies LLC for the production of glowing “crayons” that can be created in many colors for different uses.

The company can foreseeably market their product for consumer use and use the AFRL technology to develop other products as well, but Ripplinger says the company’s current focus is on military applications.

“Right now, we are 100 percent focused on providing the warfighter the MARC in the most efficient and timely manner possible,” he said.

“This agreement is another example of the power of partnerships through AFRL,” Chavan said. “Through the combined efforts of our innovative researchers and our commercial partners, this technology will soon be used for the good of our people in the field.”