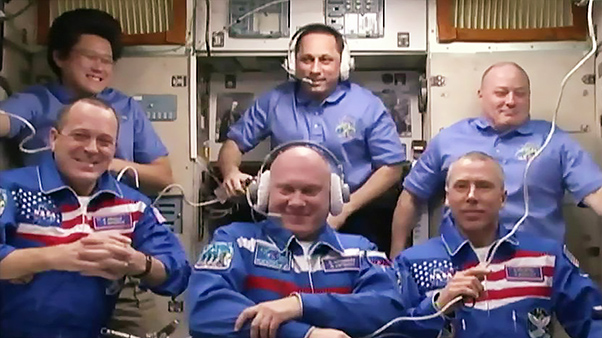 The newest Expedition 55 crew members (front row from left) Drew Feustel, Oleg Artemyev and Ricky Arnold gather in the Zvezda service module and speak to family and colleagues back on Earth. Behind them are (from left) Norishige Kanai, Commander Anton Shkaplerov and Scott Tingle.

They and the rest of the crew are getting ready for a spacewalk on March 29 and next week’s arrival of the SpaceX Dragon cargo craft.

NASA astronauts Ricky Arnold and Drew Feustel are preparing for a spacewalk just six days after arriving at their new home in space. The duo reviewed their spacewalk procedures today with fellow astronauts Scott Tingle and Norishige Kanai. The veteran spacewalkers will install communications antennas and replace a camera assembly during the excursion set to begin at 8:10 a.m., EDT. NASA TV broadcast the spacewalk activities live beginning at 7 a.m.

Expedition 55 Commander Anton Shkaplerov has been packing a Russian resupply ship with trash and old gear readying it for its departure March 28. The Progress 68 (68P) cargo craft will undock from the Pirs docking compartment March 28 at 9:50 a.m. It will reenter Earth’s atmosphere April 25 for a fiery demise over the Pacific Ocean. The 68P has been attached to the station since Oct. 16.

The next cargo craft due to resupply the station is the SpaceX Dragon. After its launch April 2 at 4:30 p.m. Dragon will take a two-day flight to the station. The commercial cargo craft will be robotically captured and installed next April 4 at 6 a.m. to the Earth-facing port of the Harmony module.

Kanai and Tingle will be at the robotics controls inside the cupola when they capture Dragon with the Canadarm2 robotic arm. The duo practiced the Dragon rendezvous and capture procedures today. The crew has also been configuring the orbital lab for the new science experiments Dragon is delivering next week.