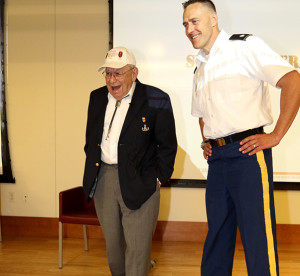 Three years after President Franklin D. Roosevelt’s famous Dec. 8, 1941 speech that rallied support for and ignited a passion to protect the Nation from the Axis Powers, a young and ambitious petroleum engineer answered the call of duty.

Gerald “Jerry” D. Simon, one of the last surviving bomb disposal technicians to be trained at Aberdeen Proving Grounds, Maryland, spoke about his experience as an EOD technician during WWII during a professional development session, hosted by 71st Ordnance Group, May 10 at the National Guard Training Center at Fort Carson, Colo.

Simon volunteered to serve the U.S. Army in 1944 and would see action in Japan in Okinawa and Tokyo, before being discharged in 1946. While his service was short, the experiences he gained in the identification and disposal of ordnances from this era stand the test of time.

Simon, now 95 years old, began his story with how he found himself in bomb disposal.

“I was working on my engineering degree and was told to report to the local draft board,” said Simon. “There was a big problem in that because my dad was on the draft board.”

Simon’s father, a World War I veteran who served 21 years in the Navy, had his son’s draft papers sent to another board to avoid a conflict of interest. Simon was able to complete his engineering degree and voluntarily joined the Army.

Simon said it was because of his degree that the Army sent him to Aberdeen to begin bomb disposal training.

“I had no idea what bomb disposal was like,” said Simon. “At the time, I knew about enough to light a match.

“If I can recall correctly, I think they implied to us, ‘Let’s not fool around, what you are going to be doing right now; what you save, might be your own life,'” said Simon.

Training was comprehensive and thorough. Simon remembers being impressed by one of the final tasks given by the school, which involved sticking his arms through two small holes in a wall, forcing him to rely on touch versus sight, to assemble and disassemble American-made fuses that sat on a table on the other side of the wall.

Simon’s stories grew in excitement and suspense as he began to describe some of the missions he carried out in Japan.

His stories ranged from rendering ornate Japanese hand grenades inert and clearing fields littered with various explosive devices, to destroying twin submarines buried in a tunnel with plastic explosives and an airplane hangar full of engines.

“[The airplane hangar] was one hell of an explosion,” said Simon.

As interesting as his stories are, Simon said the job wasn’t without its somber moments.

He recounted one incident where a young boy lost part of his hand because he was playing in an area with active fuses, accidentally triggering one. Simon and his team rushed the boy to a local hospital and contacted the boy’s mother.

“I am pretty sad about it,” said Simon. “We didn’t have any more accidents after that.”

Throughout the session, black and white photos of Simon were projected on to a wall behind him. Of all the photos displayed, Simon said there was one that held a particular importance to him. The photo was of him standing with Japanese children in front of a large bomb.

Simon said he wanted to remember the Japanese children as being happy, like in the photo, because more often than not, “[Japanese children] were the unfortunate victims of war.”

One by one, the young EOD technicians thanked Simon for sharing his stories with them at the conclusion of the session.

“To be around [Simon] and to hear his stories is an opportunity that not many of us are going to get too many more times in the future,” said Command Sgt. Maj. Weston West, 242nd Ordnance Battalion. “We want to take advantage of it while we can.”

Lt. Col. Gregory Hirschey, deputy commander, 71st Ordnance Group, said the session was special because it allowed his young EOD technicians to see firsthand the progress that has been made from World War II-era bomb disposal to today.

Simon said he was honored to share his stories and that, “it’s always good to reminisce a little bit.”

“I have a lot to be thankful for and it is a great, great thing for me mentally to know that somebody out there likes you and appreciates what you do,” he said.